Weebit-Nano Ltd, an RTO target for currently ASX-listed Radar Iron Ltd (ASX:RAD), has announced a significant technological breakthrough as part of its research and development work, developing the next generation of memory storage devices.

Weebit has managed to develop a “nano-porous Si ReRAM” solution with filament size less than 5 nanometres (nm) in scale.

The ability to scale down to this level of nano-miniaturisation has been one of the major challenges facing filament-based ReRAM technology development. Currently, the cut-off point whereby further minituarisation was thought to be impossible was 16nm.

Weebit has potentially opened the flash memory gates to go into a paradigm shift and enter a new level of efficiency.

Prior to this breakthrough development has been restricted at the 16nm and 10nm levels due to restrictions imposed by the laws of physics.

“As filament size decreases, electrical current densities increase; the same amount of electricity needs to travel through a smaller surface area of filament. This can lead to filament ‘burn-out’, or in less severe cases compromising performance reliability” according to today’s Weebit announcement.

Developers of other filamentary ReRAM technologies that are based on metal oxides are unlikely to be able to scale down below 16nm to compete with Weebit, without significantly impairing their performance and reliability.

Weebit’s breakthrough could potentially create a patent-protected competitive advantage that enables the re-listed entity to become a dominant force in ReRAM memory storage in the coming years.

RAD’s takeover of Weebit is expected to complete later this year following the completion of a due diligence period in earlier this month.

Once the RTO deal is formalised, RAD will acquire 100% of Israel-based Weebit-Nano, and move into the ‘non-volatile memory market’ expected to grow from US$580 million in 2015 to US$3.6 billion in 2020 – a growth rate of 520% over five years. Tech analysts expect ReRAM technology to become the market leader in memory storage given its capacity to store more information with better reliability and with smaller components that allow for miniature products to be built. ReRAM technology can replace traditional Flash memory, and is expected to be used widely from 2018 onwards.

A forecasted 40 zettabytes of storable content will be produced annually by 2020, and that number is expected to continue doubling every 2 years. One zettabyte is equal to a thousand exabytes or a billion terabytes.

Having developed a superior storage solution to the rest of the market, Weebit hopes to have a prototype product built within the next 18 months and says it’s already “advancing discussions with four global recognised Research and Development companies”.

In addition, Weebit is conducting negotiations with prominent semiconductor manufacturers regarding joint venture development, with today’s news “expected to hasten those discussions”.

Weebit was incorporated in Israel in 2014. Domiciled in Tel Aviv, Weebit in partnership with Rice University is one of the world’s foremost developers of Silicon Oxide {SiOx) ReRAM technology. It has been built around a revolutionary memory and semiconductor technology invented by Professor James Tour of Rice University in Houston, Texas. 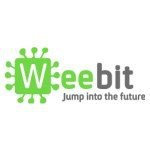