Roots Sustainable Agricultural Technologies Limited (ASX:ROO) has initiated a planting program specifically aimed at examining the effects of its RZTO and IBC technologies on several protein-laden crops to increase the content of leghemoglobin.

The crops will be planted at Roots’ research and development hub in central Israel where the protein content of the beans and peas will be measured in a two-part program.

During this process the company will employ its root zone temperature optimisation (RZTO) and Irrigation by Condensation technologies. 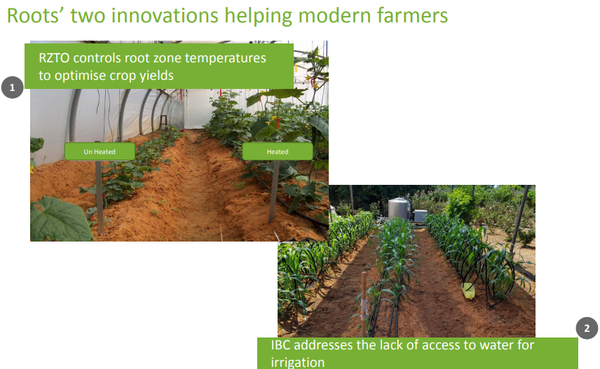 Initially root zone cooling will be measured, then in the autumn and winter a second round of crops will be tested using root zone heating.

Roots’ Irrigation by Condensation (IBC) technology will then be used to examine the effect on protein content of the ‘deficit irrigation’ concept using irrigation from just humidity in the air.

The results from each plot will be compared with a control plot planted under the same ambient conditions enabling Roots compare the results.

Leghaemoglobin is a form of protein in plants and contains Heme, the key ingredient in plant-based meats, similar in look, preparation style and flavour as beef, but without the environmental impact and negative health effects of real beef.

Beans and peas are examples of crops from which Heme can be extracted.

Growing interest in meat replacement crops has accelerated the search for high protein vegetables and technologies that can increase the protein content in any given crop.

Management highlighted that one kilogram of beef requires 15,415 litres of water.

By comparison, the production of one kilogram of pulses has a water footprint of 4,055 litres of water, 74% lower.

From a broader perspective, the Israeli-based Roots is developing and commercialising disruptive, modular, cutting-edge technologies to address critical problems being faced by agriculture today, including plant climate management and the shortage of water for irrigation.

Roots has developed proprietary know-how and patents to optimise performance, lower installation costs, and reduce energy consumption to bring maximum benefit to farmers through their two-in-one root zone heating and cooling technology and off the grid irrigation by condensation technology.

Looking specifically at the planting program announced today and the group’s associated goals, global markets suggest that it could be targeting a growth industry.

Companies such as Beyond Meat (NASDAQ: BYND) and Impossible Foods have developed versions of plant-based substitutes for meat which are now sold commercially.

Beyond Meat’s market capitalisation has increased by over 500% since its May 2019 IPO to US$10 billion.

Summing up her take on this emerging industry and the role Roots is likely to play, chief executive Sharon Devir said, “Roots is aiming to enter the meat replacement market with this research initiative.

‘’We plan to address a major market that is surging due to the changing way we eat.

Citing research from https://www.marketsandmarkets.com/ResearchInsight/plant-based-meat-market.asp, Devir highlighted that the global demand for plant-based meat is estimated to reach US$27.9 million by 2025.

Devir also explained that according to reports, bean and pea protein is becoming more accepted in communities and is rapidly gaining popularity among plant-based meat manufacturers at a global level thanks to its high protein content and health benefits.

On this note, leading manufacturers in the global plant-based protein industry have shifted resources to developing common meat products, using pea protein as a base for future product development.

Given this backdrop, roots is continuing to look for value add opportunities in the plant-based meat sector, an initiative that could potentially provide new income streams and revenue diversification, as well as exposure to a growth industry.