The Israeli-based group is developing and commercialising disruptive, modular, cutting-edge technologies to address critical problems being faced by agriculture today, including plant climate management and the shortage of water for irrigation.

Roots has developed proprietary know-how and patents to optimise performance, lower installation costs, and reduce energy consumption to bring maximum benefit to farmers through their two-in-one root zone heating and cooling technology and off the grid irrigation by condensation technology.

The delegation organised by the Australia-Israel Chamber of Commerce learned about Roots’ agritech solutions, including its patented Root Zone Temperature Optimisation (RZTO) and Irrigation by Condensation (IBC) technologies.

Roots co-founder and executive director Boaz Wachtel, who just happens to also be on the board of the recently acquired Creso Pharma, can be seen below explaining the technology. As a point of interest, CPH was acquired by Canadian cannabis firm PharmaCielo Limited (TSXV:PCLO) for $122 million - which is good news for the $6 million capped Roots. 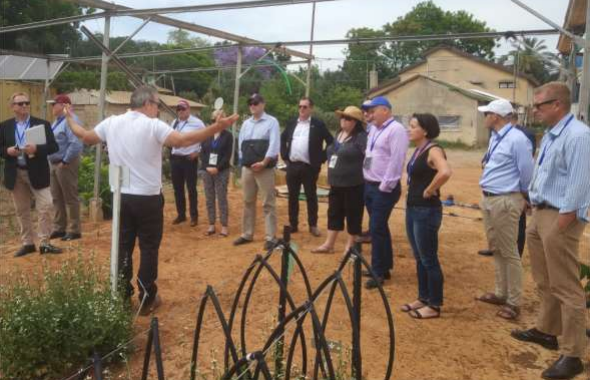 They were also familiarised with how they might be applied in Australia to help ameliorate the impact of drought on agriculture.

Roots highlighted that the Australian agricultural sector at the farm-gate is valued at US$45 billion annually with nearly 80% of produce exported to global markets.

However, water scarcity for agriculture use is becoming an acute challenge, especially in South Australia.

The technology has proven its versatility, having been successfully used on crops as diverse as tomatoes, strawberries, lettuce, basil, chives, cannabis and various flowers.

The IBC off-grid system utilises humidity in the air and energy sourced from the sun or wind to irrigate crops and operates without access to electricity or a normal water supply.

“They are very relevant to the challenges faced by both the South Australian and national agricultural industries.

“IBC technology has the potential to support food production in the most remote communities who have limited access to water, including Indigenous communities.

“We welcome further collaboration with Roots to explore the possible use of these technologies and the impact it could have on South Australian agriculture.”

Mark Allison, CEO and Managing Director of Elders also acknowledged the potential benefits for certain agricultural sectors in Australia, saying, “It was great to have the opportunity to review the Roots technology.

“We see this as a helpful tool on a number of key market segments in Australia.”

Roots’ Chief Executive, Sharon Devir’ highlighted that Israel has always lived with drought, and with the impact of climate change the situation was likely to worsen in Australia, particularly in the south-east and south-west regions.

Devir said, “Even in remote areas the solar-based IBC system could be an important avenue for indigenous aboriginal communities to produce agricultural crops just from humidity in the air.

Securing self-sufficient food supplies on a remote community level is an important part of the vision of the use of IBC in Australia.”