Shares in Victory Mines (ASX: VIC) surged more than 30% to an intraday high of 1.6 cents on Monday, July 18 after the company announced that it had entered into a Heads of Agreement to acquire a polymetallic asset situated on the western margin of the Bonaparte Basin, which is located just 30 kilometres north of Kununurra in Western Australia.

More than 50 million shares were traded in the day, representing all-time record volumes.

The acquisition is known as the Bonaparte Project, a high grade cobalt, zinc-lead-silver mineralisation with samples of up to 4.1% cobalt in soft rocks.

From a base metals perspective, the region has been compared to the high grade deposits within the soft sedimentary host rocks commonly found along the Mississippi River in the US, otherwise known as Mississippi Valley Type (MVT), or in the Lennard shelf in Australia.

Of course, with zinc being the best performing base metal in the last 12 months, and in recent weeks pushing up towards its long-term high of circa US$1.35 per pound, companies with exposure to the metal are in favour.

Bonaparte acquisition marks the beginning of a new era for Victory

The Bonaparte Project is VIC’s first acquisition since being recapitalised and repositioned as a focused mining group. The company has adopted a strategic low-cost acquisition strategy, targeting cobalt, zinc, copper and gold projects in highly prospective areas.

The Bonaparte Project not only ticks the ‘highly prospective’ box, but it also benefits from ready access to essential infrastructure including port facilities. With immediate access to power and a reliable transport route to the mine, management expects to be in a position to commence exploration in the near term.

Looking more specifically at the geological characteristics of the area, it is known for the occurrences of carbonate hosted base metal deposits such as Sorby Hills (WA) and Sandy Creek (NT), with previous work highlighting zinc-lead soil anomalies, spatially associated geophysical anomalies, and the presence of mineralised gossans and carbonate breccia zones. 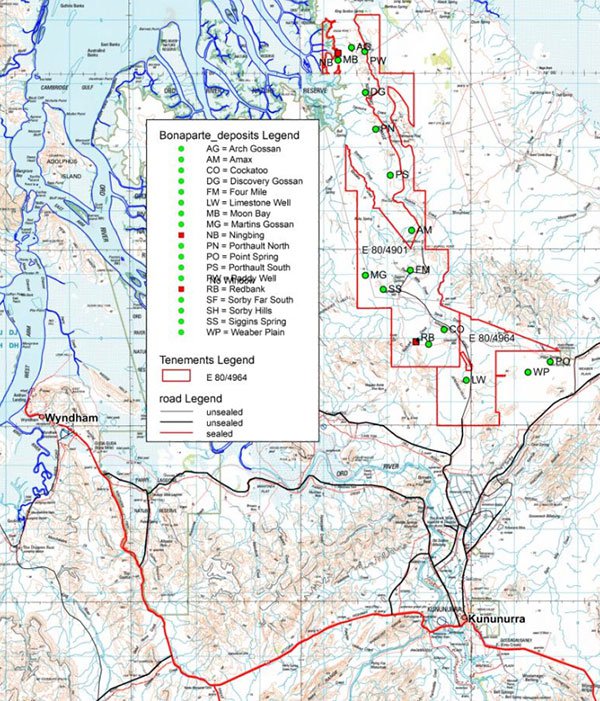 Though VIC will have the benefit of previous exploration data compiled by other various parties that have worked the area, this will be the first focused exploration campaign at Bonaparte.

The tenements not only offer the opportunity to discover MVT style zinc-lead-silver deposits, but the preliminary sample package has indicated strong cobalt and zinc results, requiring further analysis and follow-up exploration.

The grades quoted in the above map for the rock chip samples have been measured using a handheld analyser, and as such are indicative grades only.

VIC intends to explore the entire tenement area targeting fault corridors that mineralising fluids have used to travel up from deep in the basin.

Drilling to date has focused on the stratigraphy up dip of the extensional normal fault structures that host Lennard shelf style mineralisation.

This interpretation suggests mineralisation identified to date is just leakage from the more significant mineralisation within the extensional normal fault structures. VIC plans to acquire gravity mapping and undertake soil sampling with a targeted drilling campaign to be conducted in the near future.