The World Cup represents an economic boon for the host nation: Russia predicts this major global sporting event will positively impact its economy to the tune of circa $31 billion at this year’s World Cup.

Factor in sponsorships and TV rights and the Cup has broad international relevance, not just host nation impact.

Billions of dollars will also change hands between betting agencies and punters. Current estimations according to sports data analyst Darren Small of SportsRadar suggest the sports match-betting industry is worth between $700 billion and $1 trillion.

Looking at Australia versus France, this weekend saw millions of punters test their luck. No doubt the allure of steep odds (such as Sportsbet offering a peak of $13 during the week for Australia to win) proved too much to resist for many.

Betting on sports is far from a new pastime, particularly for Australians. It is one of few countries where sports gambling is not only legal, but (rightly or wrongly) part of the collective sporting experience.

Collectively, Australians spend $23 billion a year on gambling, based on figures from 2014-2015 — that figure was an 8% increase on the previous year, with 30% of the increase reported to come from sports betting.

In the US, as reported in Finfeed last week, the US Supreme Court lifted a ban on sports betting, following years of the Professional and Amateur Sports Protection Act having outlawed any gambling on sports outside of Nevada. Following the Court’s recent ruling, any US state can now legislate to allow sports gambling.

The lifted ban means gamblers will be able to bet on single games and championships for a variety of professional sports including baseball, football, hockey, basketball, soccer, golf and auto racing. Already, Americans are believed to wager about $US150 billion (A$199B) on sports each year illegally, according to the American Gaming Association.

Here’s an interesting article analysing which countries allow gambling and its impact.

Whilst this article isn’t designed to condemn or condone the practice, what it will do is ask: can one of the oldest pastimes be brought into the modern era and made safer for punters?

The regulation of the sports betting world, particularly with the introduction of online sports gambling in the mid-1990s, has been a focus for governments in Australia and beyond who are determined to keep betting activities ‘above board’ — as well as not miss out on the considerable tax revenues to be made.

This is where cryptocurrency may have some relevance in a sports betting setting.

One of the benefits of cryptocurrencies is they can offer transparency and a traceable record of transactions.

Australians could be keen to embrace such a record-based system given the country is already seen as somewhat of a regulatory benchmark for the sports betting industry. Australia can boast a well-established regulatory framework, as well as a long-standing attitude of cooperation between sports betting companies and various sporting leagues.

This is where tech company PlayUp could have an impact.

PlayUp Limited has big plans to bring its betting cryptocurrency, PlayChip, to market. The website describes it as “an exclusive gaming token of some of the world’s leading gaming operators with a combined user base of over 500,000 and an annual turnover exceeding US$430 million in 2018 alone”.

From 2015-2016, PlayUp acquired several sports betting assets and became a fully licensed sports betting provider, before it then expanded to over 70 countries. It was then that the opportunity to create a ‘next generation global payment and rewards system’ became apparent, and it identified blockchain technology as the best way to achieve that.

Is PlayUP set to monopolise betting markets with PlayChip?

PlayUp is not the only player looking to combine cryptocurrency with sports betting. Wagerr.com has entered the market along with sportsbet. Here’s a look at some bitcoin betting sites. However, with its PlayChip ecosystem ambitions already so advanced, PlayUp is one of only a few companies, globally that may actually offer such a comprehensive, cryptocurrency-enabled ecosystem in the near-term.

Its current network of sports betting assets looks like this: 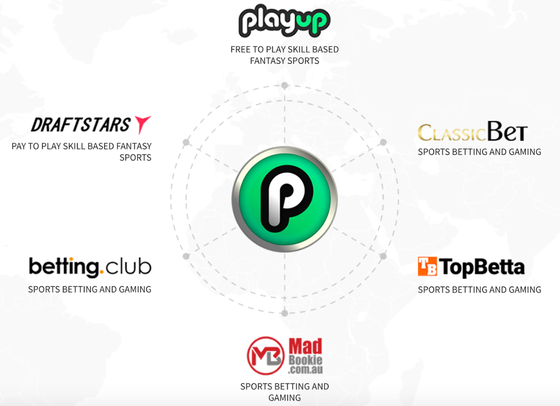 As far as the US market goes, one research firm predicts that 32 states are likely to offer sports betting within five years, following the US Supreme Court’s recent decision.

Select states that already prepared legal groundwork in the lead up to the law change could feasibly have sports betting within just weeks.

Jumping on the sports betting bandwagon

PlayUp hope to capture some of the current sports betting enthusiasm, particularly with the World Cup having such an impact and as we head into major sporting tournaments such as Wimbledon and respective football finals seasons.

The company is already well on its way towards becoming one of the largest fantasy sports platform operators.

Next, it hopes that playing the cryptocurrency card will prove to be a risk that’s worth the rewards.