Seven West Media’s (ASX:SWM) investment into NewZulu (ASX:NWZ) continues to drive buzz – with NWZ pinged with a speeding ticket on the excitement.

Crowdsourced media player NWZ was given a ‘please explain’ by the Australian Securities Exchange after its share price rocketed from 1.1c on Friday to an intraday high of 1.9c yesterday – a rise of more than 72%.

The company recently completed the second and third tranches of a $5 million placement – a major investor in which was SWM.

It theorised that the appearance of SWM on its initial substantial shareholding registry may have caused a head-take from those not following the NWZ story. 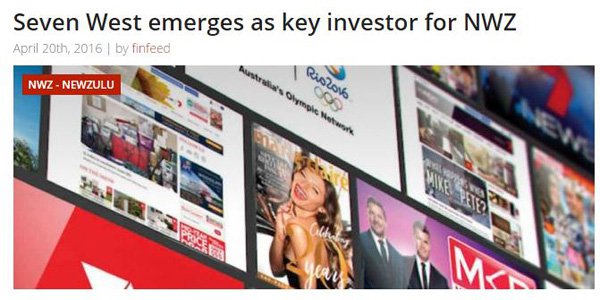 The price increase also follows on from the appointment of Marc Milgrom as interim CEO five days ago.

It follows on from a broader company re-focus into the North American market.

NWZ, however, appeared to blame to hot interest in its stock in the SWM investment – which amounted to $3.69 million.

“The capital raising places NewZulu in an exciting position to collaborate with Seven West Media on crowd-sourced content intiative across Seven West Media’s traditional publishing and broadcasting business,” it told the market.

The appearance of SWM on the NWZ scene was confirmed back in April, but it has also entered content collaboration projects with the likes of the ABC in the past.

Newzulu is a news platform where publishers can connect with citizen journalists who are on the scene of unfolding news taking footage with their mobile phones.

In the past, citizen journalists had to connect with individual newsroom, and then wait for a response.

For publishers, they had to verify the content was real.

NWZ however takes a lot of the gruntwork out of the process and makes things easier for both publisher and citizen journalist.

Newzulu verifies the content to make sure it’s legitimate, and then pays the citizen journalist a fee for the content.

Then a Newzulu partner such as Agence France Presse or Getty Images then onsells the footage to news organisations which have paid for access to the Newzulu library.