MyFiziq Limited (ASX:MYQ) has released its Quarterly Activities Report for the three months to 30 September, 2020 which featured an impressive uptick in cash receipts from customers.

Scientific Reports is an open access Nature Research journal and is the 7th most-cited journal in the world.

The findings identified that there is a high correlation between certain anthropometric measurements and VAT mass.

In particular, the study confirmed that, in men, waist circumference (WC), waist-hip ratio, and waist-height ratio (WHtR) had ‘high’ correlations with VAT mass. In women, only WHtR was ‘highly’ correlated with VAT mass.

“This is a significant milestone for the company and validation of our scientific rigour when developing our technology and unique data sets. It also acknowledges our approach to using anthropometry measures, including waist circumference, as a scientifically agreed method to identifying chronic disease risk within a population," said MYQ CEO Vlado Bosanac.

"Our ability to screen people at home on their personal device in complete privacy, is significant and the publication has given this deep consideration and as such has accepted the science as publishable due to its high standard.”

Coming off a nominal base in the previous corresponding period, MYQ's income of $659,000 represented an increase of more than 1600% compared with the same quarter in 2019.

Another development that boosted the company’s coffers was the receipt of a $784,000 R&D tax incentive from the Australian Tax Office, the largest claim to date.

There was also plenty to like in terms of cash preservation, the other important part of the equation.

Cash expenditure reduced from about $1.2 million last year to $1 million in the current quarter, a 15% improvement.

There was a vast improvement in net cash used in operating activities, a modest $310,000 compared with more than $1.1 million in the previous corresponding period.

From an operational performance, the quarter also featured the important launches of Evolt Active and Bearn.

In terms of cash flow metrics, the following graphic tells the story. 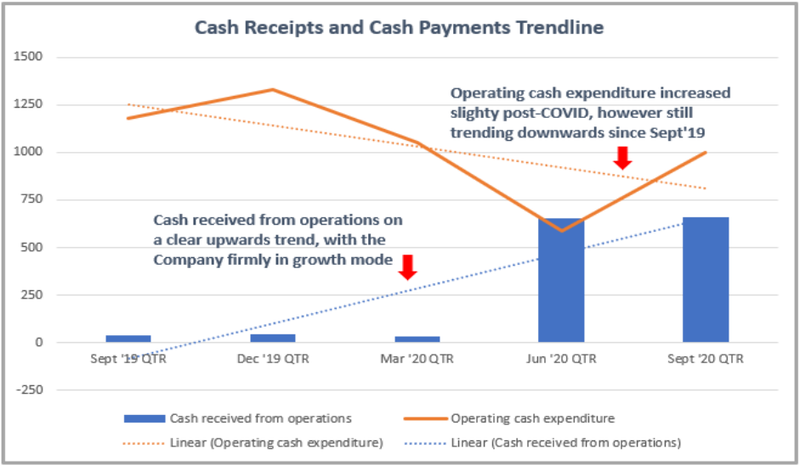 So strong has MyFiziq’s start to the December quarter been that its significant achievements in September have arguably been overshadowed.

It was a stellar start to October when the company announced that it had signed a binding term sheet with Nexus-Vita Pte Ltd, a Singapore-based health monitoring and management technology group.

Nexus and MyFiziq will collaborate to integrate MyFiziq’s body tracking application into all of Nexus’s verticals, commencing with an initial integration into Nexus’s pre-emptive health platform by January 2021.

Under the terms of the agreement, Nexus has undertaken to deliver a minimum of 100,000 active users within the first 12 months of launch.

Shortly after the Nexus deal was announced the company signed a binding term sheet with Jayex Healthcare Limited (ASX:JHL), a UK based health communication monitoring and management technology company.

The Jayex brand is synonymous with patient management systems for general practitioners (GPs) in the UK where the company has been operating for 40 years.

Under the agreement, Jayex intends to integrate the MyFiziq CompleteScan capabilities into its Jayex Connect platform, as well as adding new capabilities that allow for remote patient assessment using the CompleteScan platform to assess patient and consumer needs.

Come mid-month, it was time to raise capital and management completed a substantially oversubscribed $5 million capital raising, placing the company in the most robust financial position it has been in for a number of years.

Discussing this development and other financial developments that have placed the company in a strong position, chief executive Vlado Bosanac said, “The week has closed out on a very positive note with the oversubscribed capital raising placing $5,000,000 into the MYQ account.

‘’This was further enhanced with inflows from our US NASDAQ initiative funding, Government R&D reimbursements, a license payment from BCT and partner revenues.

‘’I am pleased to say the company is in the best financial position it has been in for the past few years, with ample capital to accelerate growth and execute on our NASDAQ initiatives.”

Shares in MYQ have increased five-fold since June, but broader market volatility has seen them retrace to about $1.00, perhaps providing an entry opportunity for investors who missed the strong uptick that occurred in recent months.