MyFiziq teams up with Tinjoy as it eyes off China

In a development that has driven MyFiziq Limited’s (ASX:MYQ) share price above the $2.00 mark, the company has concluded a Terms Sheet, granting Tinjoy access and distribution rights to the MyFiziq CompleteScan platform, which will be integrated into Tinjoy’s “WinScan Digital Health Platform” (WinScan).

MyFiziq’s shares have performed extremely strongly in February, having doubled since the start of the month, surpassing’s 2018 high of about $1.50 to hit today’s all-time high.

Consequently, it would appear that technical investors see significant upside from a charting point of view, and with material operational developments in the pipeline, this recent momentum looks set to continue.

The following chart from walletinvestor.com suggests there is upside beyond the $2.00 per share mark in the near term.

It is worth noting that MyFiziq’s pushed beyond the $2.00 mark has occurred earlier than projected, suggesting that the chart predictions may be on the conservative side. 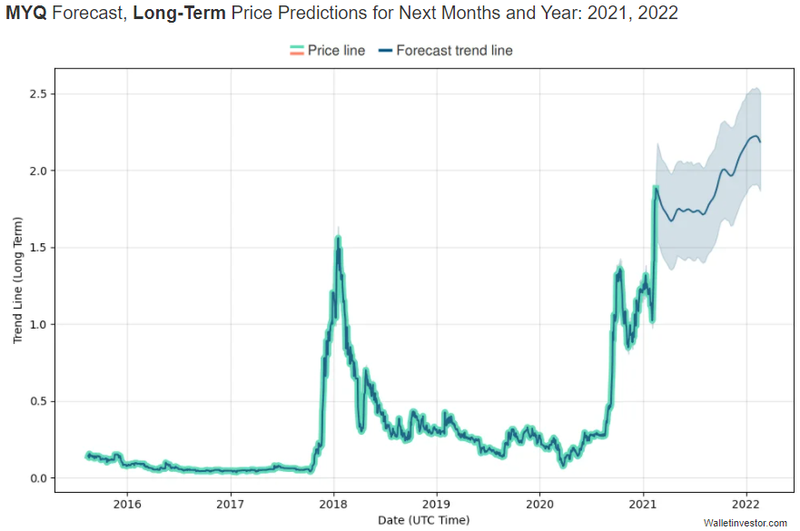 Tinjoy has captive audience of 28 million in China

Harking back to today’s news, WinScan was launched by Tinjoy in 2020 to expand the company’s digital presence in China.

Tinjoy has a captive audience of over 28 million consumers within China, and the WinScan offering has been specifically designed in its workflow to accommodate the partner and community needs it addresses.

Tinjoy has a 500 person call centre in Nanning growing to 1,000 in the coming months, and the call centre will play a significant role in achieving the agreed initial user target of 1,000,000 monthly active users.

WinScan specialises in multiple segments of personal and population health, as well as medical and preventative care using a well-developed digital engagement platform, purpose-built for China and the ease of navigation to local communities.

The platform’s evidence-based functionalities are used for early-detection and health assessments, with a primary focus on identifying individuals at risk of chronic disease.

MyFiziq and Tinjoy will be combining their respective platforms for release across multiple market segments within China, and chief executive Vlado Bosanac highlighted the fact that both parties had a view to establishing a long-term partnership saying, ‘’Tinjoy has developed a tailored approach to better health outcomes and engagement in corporate, community and telehealth platforms.

"Not only does it provide a broad and conclusive offering, it also generates comprehensive data analytics to the partner or end-users.

"I am pleased Tinjoy views the agreement as a long-term partnership, with their openness to MyFiziq acquiring a substantive holding if the platform achieves monthly users of 5 million or more.

"The agreed consideration would be well under the monthly revenue MyFiziq would see based on the pricing we have structured in consultation with Tinjoy.”

Whilst undertaking the integration, management’s initial focus will be to train 500 of the call centre team members to deliver the offering to the already-harnessed communities within the pre-existing Tinjoy customer base.

Tinjoy will be producing appropriate media to demonstrate how to use the technology, which will initially include BodyScan, FaceScan, COVID symptoms check, and later DermaScan.

The companies are targeting a release of the combined solution in the initial offering, providing individuals with the ability to take a single scan in any one of the 3-preliminary scans by the September quarter of 2021.