In what shapes up as a highly value accretive development for health tech group MyFiziq Limited (ASX: MYQ), management has signed a binding term sheet with Canadian based Triage Technologies Inc that will see the company take a strategic equity stake in Triage and license use of Triage AI health assistant technology for integration into the CompleteScan SaaS offering.

As a backdrop, MYQ has developed a proprietary body dimensioning technology that enables its users to check, track and assess their dimensions using a smartphone, from the comfort of their home.

The technology empowers users to create a representation of their body structure in the form of a 3D avatar, with accurate circumference measurements and total body fat assessment.

This technology along with management’s ability to establish partnerships in industries aligned with that of MYQ has resulted in a stellar year for the company, reflected in the strong share price performance as it increased about seven-fold from January levels to trade as high as $1.50 in October.

The Triage transaction is just another example of management’s astute ability to leverage off its state-of-the-art technology, effectively positioning it to broaden its market reach and create new revenue streams.

Discussing the rationale behind the collaborative agreement and the complementary aspects of the acquisition, MYQ chief executive Vlado Bosanac said, “Over the past 6 months, I have been developing a multi-platform strategy for MyFiziq.

"I first obtained the NuraLogix capabilities with the integration of Facial Scan using Transdermal Optical Imaging, which quickly proved to be a very attractive and complementary addition to the deep suite of image captures that MyFiziq has been releasing to the world.

"I have identified Triage as a natural fit for the platform and for the expanded interest which MYQ has developed from the medical and remote care communities for triaging users not only in the current COVID situation but also in normal times.

"Triage brings a complementary offering to our CompleteScan platform, which is assisting in the completion of my vision in creating the “Tricorder” of digital health screening in your hand.’’ 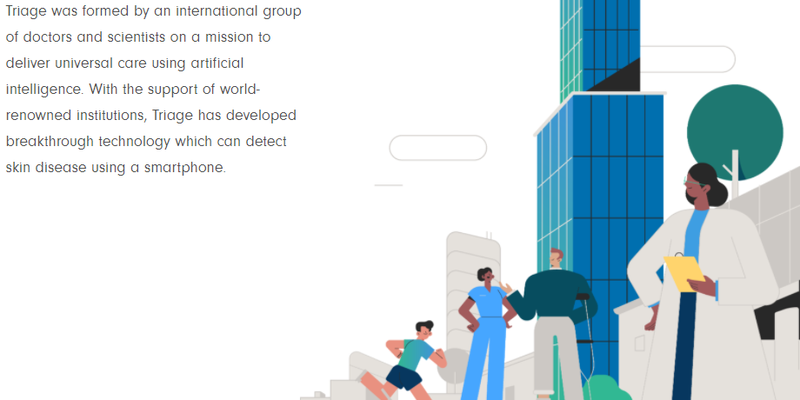 Under the terms of the agreement Triage will license MyFiziq to use the Triage AI engine, and the companies will work together to integrate Triage’s technology into the MyFiziq-owned CompleteScan platform.

The MyFiziq team, with its ‘on-device’ expertise, will be advancing the AI engine of Triage to be an on-device ready to use application for consumers.

MyFiziq and Triage intend to integrate the patented solutions to expand the capabilities of their image capture suites for the global market.

Triage has developed the world’s most advanced dermatological AI system which can accurately identify skin conditions from a photo in only seconds.

The technology was created using a proprietary database that is not only the largest of its kind in the world, but it is also larger than those of IBM and Google combined.

Triage expects to receive a US patent for its system in 2021, with further jurisdiction to follow.

The AI engine identifies 588 skin conditions in the major 133 categories, including the identification of all categories of skin cancers.

The Triage web application was released at the end of 2019 and has had over 160,000 people use the application over 500,000 times with 12% of the initial user base being clinicians utilising this new tool to provide an improved standard of care.

Triage is being used by individuals and clinicians in over 200 countries worldwide, allowing skin conditions of all skin types and tones across all ethnicities to be detected and identified.

The accuracy of the sophisticated AI engine has been tested against dermatologists and has proven to be more accurate more often than a dermatologist.

In a recent study in Canada conducted with 157 dermatologists, the Triage application beat 154 dermatologists and tied with 3 dermatologists in identifying various skin conditions including both benign and malignant skin lesions.

Benchmarking data for this study was originally published in the European Journal of Cancer.

The need for an accessible and easy-to-use application such as Triage is well understood in the current global environment, especially with 1 in 5 Americans and 2 in 3 Australians expected to develop a skin cancer by the age of 70.

With early detection and intervention, the 5-year survival rate for melanoma is 99% as stated by the US Skin Cancer Foundation (skincancer.org).

Further cited works have identified skin and related subcutaneous conditions affecting an estimated 1.9 billion people at any given time and they remain the fourth leading cause of non-fatal disease burden worldwide, affecting 30-70% of individuals and prevalent in all geographies and age groups.

Access to dermatological care is limited due to a shortage of dermatologists, causing long wait times and leaving patients to seek dermatology care from general practitioners.

Skin disease is also one of the most common chief complaints in a primary care context, with 8-36% of patients presenting with at least one skin complaint.

However, dermatologists are consistently in short supply, particularly in rural areas, and their consultation costs are rising.

Thus, the burden of initial triage and subsequent diagnosis commonly falls on non-specialists such as primary care physicians, nurse practitioners, and physician assistants.

Because of limited dermatology knowledge and training in this specialty for hundreds of conditions, diagnostic accuracy of non-specialists ranges from 24-70% leading to poor patient outcomes, such as delayed or improper treatment.

Use of teledermatology becoming more extensive

To expand access to specialists and to improve diagnostic accuracy, store-and-forward “teledermatology” has become more popular, with the number of such programs increasing by 48% in US non-governmental programs between 2011 and 2016.

In store-and-forward teledermatology, digital images of affected skin areas typically captured with digital cameras or smartphones are transmitted along with other medical information to a dermatologist.

The dermatologist then remotely reviews the case and provides consultation on the diagnosis, work-up, treatment and recommendations for follow-up.

This approach has been shown to result in similar clinical outcomes compared to conventional in-person consultation in dermatology clinics, and improved satisfaction from both patients and providers (arxiv.org).

As a means of highlighting the scale of the industry, particularly bearing in mind a large percentage of identified skin diseases will continue to require treatment, 85 million Americans were seen by a physician for at least one skin disease in 2013.

There are definitely key drivers in place for governments to incentivise industry service providers and consumers alike to be proactive in addressing skin disease issues as they accounted for US$75 billion in direct healthcare costs and US$11 billion in lost opportunity costs in 2013.

Independent research indicates that the associated costs and prevalence of skin disease are comparable with, or exceed, other diseases with significant public health concerns, such as cardiovascular disease and diabetes.

Talking more broadly Bosanac said, "As I have shared with you all over the last few months, I am looking to expand MYQ’s ability to monetise its aggregate capabilities amongst the vast amount of people that are gaining access to our platform through the many contracts which MYQ has executed, a number of which have started to go live.

"By bringing in platforms like personal health/wellness and medical checking application, this expansion process not only broadens user/market interest in MYQ capability but also generates better service by combining all these functionalities directly on the smartphone/mobile device.

‘’Consequently, these technologies and wider utilisation should significantly improve the value of MYQ.”