Dawine Ltd got off to a solid start when it listed on the ASX yesterday. The stock ended the day up 45% from its opening price of 2 cents per share.

It should be noted that share trading patterns should not be used as the basis for an investment as they may or may not be replicated. Those considering stocks in these markets should seek independent financial advice.

But don’t fear... you’ve far from missed the boat. This is just the beginning of the Dawine story.

The Australian based wine distributor began trading yesterday via a reverse listing through the takeover of Brand New Vintage, trading under the ticker code BNV. It wasn’t until today that the company officially changed its listed name to Dawine, with the new ASX code of DW8.

To get to this point, and to get the listing off the ground this week, Dawine undertook a $3 million capital raising, which was oversubscribed.

That investor tick of approval, from the oversubscribed capital raising and the strong start on the market yesterday, is a reflection of two culminating strengths of DW8.

On one hand the company is breaking into an incredibly attractive market with huge growth potential. And secondly, the management team is experienced in not only wine, but also has strong corporate and technology experience, with comprehensive marketing, trade and distribution systems in place.

Chinese consumers are rapidly changing their drinking habits with a newfound fondness for wine — Australian wine in particular.

Today, wine consumption accounts for just 4% of the total alcohol consumed in China, but the Chinese are taking up wine drinking at a rapid rate.

In what was described as an amazing success story by Wine Australia CEO, Andreas Clark, sales of Australian wine in China grew by a massive 40% in just 12 months last year. That took sales in China to around $520 million for 2016, making China the single biggest market for Australian wine.

Ten years ago, wine sales to China were worth just $20 million, now they are worth more than half a billion dollars. 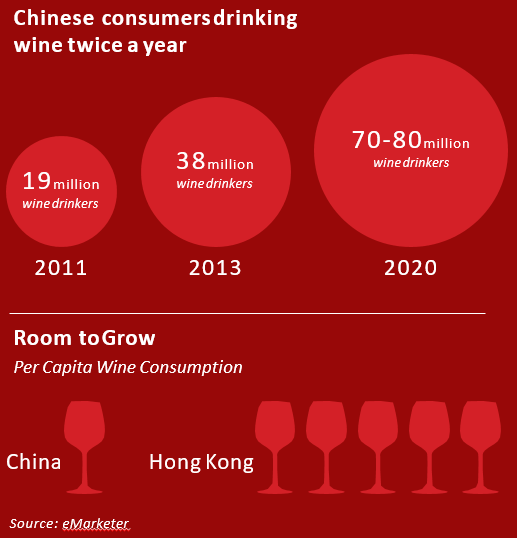 That surge in Australian wine sales in China is the start of a golden period, says research from Morgan Stanley. Chinese consumers are switching from beer and the Chinese alcoholic beverage, baijiu, to wine as they develop more Western tastes.

Chinese consumers also believe wine is healthier than alternatives, and that Australian wine is a premium product. Morgan Stanley also note that close to half of all Chinese wine drinkers plan to drink more wine going forward than they do currently.

One well known ASX-listed company that has leveraged off the rising Chinese demand for Aussie wines is $8.9 billion-capped Treasury Wine Estates (ASX:TWE).

TWE saw the growth potential in the Chinese market for Australian wines and adjusted its business model to B2C from its previous B2B model to sell directly to the consumer.

That foresight has paid off with TWE’s Asian profits jumping 16-fold over the past three years, driven by booming sales to China. Its first-half profits were $79 million in the six months to December 31 2016, up from just $5 million three years earlier.

And as Chinese consumers continue to drink more wine the company’s profit margins keep climbing... its margin in Asia rose from 28.6% a year ago, to 36.2% last quarter.

These results are seriously impressive, yet the problem with Treasury Wines [ASX:TWE] is that it seems the horse has bolted. While TWE is a way ahead as of Dawine in sales volumes, it is now in a more mature stage of growth than DW8.

Plus, the well-known stock seems to be fully valued by the market. Consider that its PE ratio — which is a measure of a company’s share price compared to the earnings it generates — is at 35 times. That well above the ASX average, which typically sits around 15 times earnings.

So while TWE and its operating future remain positive, there may be only limited upside for investors.

Fortunately for DW8’s early shareholders, that company is not yet so widely recognised by the market and it still has huge potential ahead to capitalise on the growing Chinese market for Australian wine.

One Australian company with some similarities to DW8 is Australian beer exporter to China, $218 million-capped Broo Ltd (ASX:BEE). Since listing on the ASX in October last year, Broo has gotten off to a strong start, returning investors 80% in less than five months.

Broo is leveraged to many of the same drivers as DW8, mainly consumers growing tastes for western style foods and beverages, along with increased discretionary spending.

While still lucrative, the Chinese beer market is much more saturated than the wine space. Five global giants control 80% of all sales, including American majors SABMiller and Anheuser-Busch being well settled in China. It looks like the real money is to be made in wine, Australian wine in particular.

There’s huge growth potential for a wine distributor that has the product, plus the systems in place to get it in front of buyers and delivered.

In China, Wine is flying off the shelves, but more so out of the warehouses, as the growing popularity of online shopping rivals that wines sales. Chinese shoppers have taken to online shopping with gusto — growth in that market is expected to double within three years.

This places DW8 in an enviable position. DW8 has recognised the opportunity that comes with this paradigm shift and has positioned itself in the early stages to take full advantage of this growth and change.

It should be noted, however, that any further catalysts base on the above would be speculative at this stage and should not be taken as guaranteed. Investors should seek professional financial advice for further information.

It has all its ducks in a row with all required licences approved, including export licences, liquor licences and business licences.

DW8 has a custom built B2C online platform that is built tested ready to take orders, plus it has proven digital sales channels and a comprehensive digital marketing campaign. It also has a functioning warehouse in Shanghai’s free trade zone that is already stocked with wine ready to distribute. 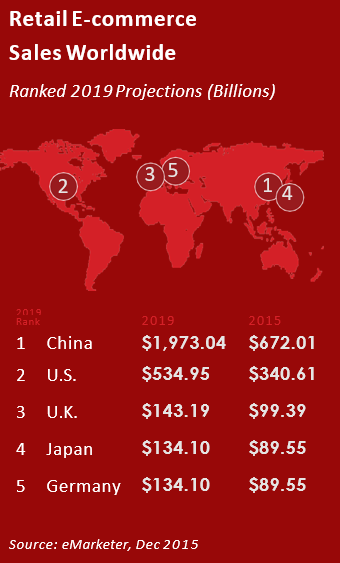 The company has a unique relationship with the winemakers, so that the wines sold by the company are often available in only limited quantities and exclusive to the Chinese market. It already has numerous wine producers from Australia and France signed up, with more knocking on its door.

It looks like now could be a good time to take a closer look at DW8. 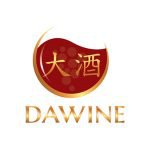 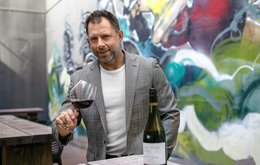 How to bring your business idea to life 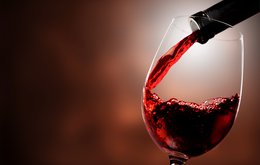 Rat's Rant: Stocks that are hot, not... and Charlie Sheen 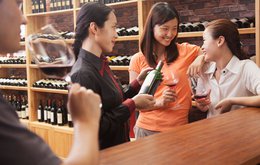