As telecommunications innovator, Vonex (ASX:VN8), prepares to launch its new mobile app in 2019, as well as introducing discounted telco services for its shareholders, the group has finished off 2018 with continued growth in Private Branch Exchange (PBX) registrations and record monthly billings.

The latter is an important factor as it is recurring revenue which provides an increased level of certainty around the company’s ongoing financial performance.

November was the company’s strongest month of customer billings with a total of $741,000, representing year-on-year growth of approximately 13%.

This income will drive the company’s operating cash flow in the December and March quarters.

Vonex continues to deliver growth in its cloud-based PBX users with registrations up 26% on a year-on-year basis to 25,800.

The following graph shows the company’s consistent performance in growing this area of its business over the last two years. 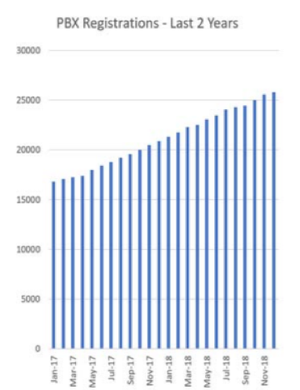 Management noted that PBX registrations are a key indicator of its business development progress as Vonex penetrates the multi-billion-dollar Australian market for telco services to small and medium enterprises (SMEs).

The company attributes its success in this area to maintaining exceptional service, evidenced by positive data received from the Telecommunications Industry Ombudsman (TIO).

Since July, when the Australian Communications and Media Authority instigated vigilant monitoring of complaint handling practices, the high level of complaints became starkly apparent, with the TIO receiving over 11,000 new customer complaints across the industry during the month of October alone.

Since July, Vonex has recorded only two TIO actions, and its average waiting times for phone inquiries has reduced to less than 20 seconds.

Uptick in channel partners to drive growth in 2019

Vonex continues to sign up and on-board new channel partners sourced through inbound inquiries and targeted marketing to the IT and communications managed services provider community.

Channel partners helped to accelerate growth in the company’s business by selling its proprietary technologies, including its cloud-based PBX and Vonex branded traditional mobile, internet and business phone plans. 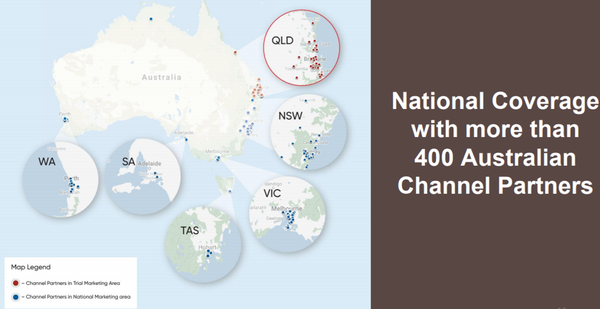 In the first half of fiscal 2019, the company has added 30 new channel partners and remains on track to add 100 partners for the full year.

The strong percentage of channel partner re-engagements indicates that Vonex is likely to maintain their support.

The Oper8tor mobile application is expected to be available for download from both the Google Play Store and Apple App Store by March.

This will allow users to register and schedule conferences from their mobile devices, removing the need for a desktop computer organise conferences.

The app provides most of the commonly used desktop functionality on both tablets and mobile phones, while also adding a number of mobile-only features such as 'contact syncing' and 'call blast', with the latter immediately calling all participants of an upcoming or previous conference.

With an expanded sales team, Vonex expects to grow its presence in 2019.

Management will also be launching a special offer to its shareholders, enabling discounted access to services provided by the company, which will include feature rich IP voice plans and NBN bundled offers.

Further information on the offer will be provided next year.