Speculator aims to identify stocks that tend to fly under the radar, perhaps due to the fact that they don’t suit the risk-averse investor, or simply because they are small, emerging, potentially next big thing stories where the market moving news is yet to break. FinFeed will be looking to uncover such stocks on a weekly basis.

Energy management and mobility solutions software group, Simble Solutions (ASX:SIS) has released an outstanding result for the September quarter, featuring doubling in its cash receipts quarter on quarter, the best performance since the company listed on the ASX in February.

As a backdrop, the company’s Software as a Service (SaaS) platform has Internet of Things (IoT) capabilities and enables enterprises and consumers to remotely automate energy savings opportunities to reduce their energy bill.

Simble operates in the small to medium enterprise (SME) SaaS market and targets the distribution of its platform through channel partners.

The company has an international presence with offices in Australia, New Zealand, the UK, Vietnam and the United Arab Emirates (Dubai).

As well as cash receipts increasing 108% to $1 million in the September quarter, the company generated the first material cash flow contribution from the Simble Energy Platform, totalling $500,000 in customer receipts.

Adding to the quality of its financial performance for the quarter was a 25% improvement in net outflows.

Simble is providing the foundation for ongoing growth having increased customer sites on the Simble energy platform by 150% in 2018.

Installations in the UK increased four-fold during the September quarter.

Pointing to the prospect of a strong first half performance was a substantial increase in cumulative sales across Australia and the UK subsequent to September 30.

The company’s UK expansion strategy will be accelerated by technology collaboration with Accel-KKR backed Utiligroup, targeting mass adoption in the residential market.

Caught up in the tech sell-off

In October, the NASDAQ index fell from more almost 9% as many global blue-chip IT companies experienced a sharp sell-off.

In such an environment it is often the case that smaller stocks are hit even harder, and this appears to be the case with ASX-listed Simble Solutions, as indicated in the following chart which illustrates its October performance (yellow line) against the NASDAQ index. 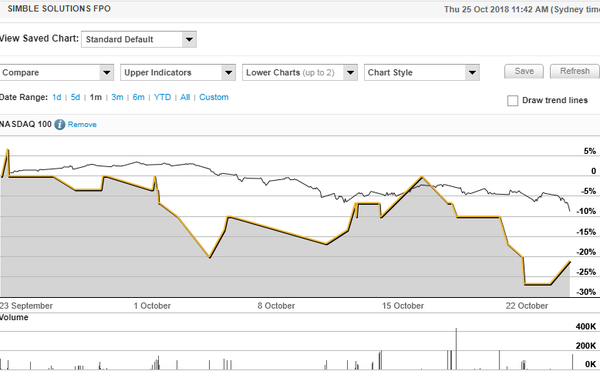 At odds with its outstanding quarterly report, the company’s shares have slid 27% from 15 cents to 11 cents during October.

The promising progress made in the September quarter, along with management’s indications of a continuation of strong trading conditions, suggests that it could be an ideal time to snap up the company at a relatively cheap price.

The strong operating performance not only had a positive impact on the September quarter, but it has promising implications going forward given that the company is building its recurring revenue, providing income visibility and predictability.

In its current configuration, the Simble Energy Platform comprises a bundled software and hardware solution, with a weighted average subscription term of three years.

As subscriptions are prepaid in advance, recent growth in orders is poised to have a material impact on Simble’s cash flow.

The first material impact on cash flow from the ‘Simble Energy’ division is anticipated during the current quarter.

During the quarter Simble has cemented its position as the fastest growing energy SaaS company on the ASX by number of customer site installations.

Over the three-month period, the number of customer sites on Simble’s IoT platform increased 45%, taking the total user growth since the beginning of the year to over 150%.

Installations in the UK increased four-fold during the September 2018 quarter.

In the UK, Simble achieved the first breakthrough early in the quarter, as the channel partnership with Powercor Ltd delivered first material sales exceeding $180,000. 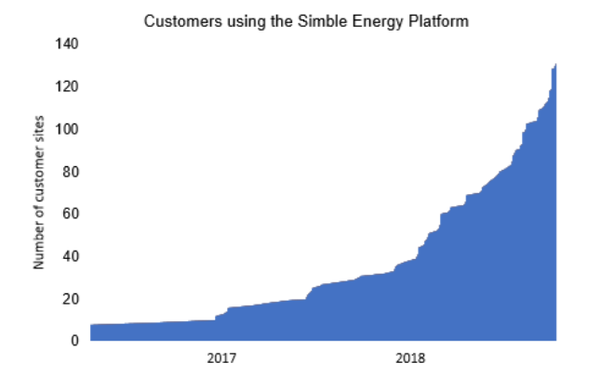 Each installation delivers recurring Software-as-a-Service (SaaS) revenue, recognised on a pro-rata basis over the contract life.

The orders also include hardware components, which are recognised upfront.

Investing in the future

While management has demonstrated its ability to do the best with what it has to work with at the moment, just as important is the fact that it has recognised the potential to develop new technologies to deliver additional revenue streams in the near term.

Simble invested $560,000 in research and development, primarily aimed at accelerating an upgrade of the Simble Energy Platform that will introduce the ‘Virtual Analytics’ module.

This version of the product is designed to support the next generation of energy management solutions made possible by the UK Government’s smart meter rollout.

The Virtual Analytics platform is developed in collaboration with Utiligroup, a UK based supplier of enterprise SaaS to utilities.

Development of the platform is largely complete with a formal launch now scheduled for the December quarter.

Targeting the UK residential market, the new platform is delivering energy analytics to users without the requirement for additional onsite hardware installation.

It is a potential gateway to mass market penetration and is expected to generate recurring licence and SaaS revenue.

The launch of this new technology, and in particular the subsequent release of evidence that it is gaining traction with users, is a potential share price catalyst.

On the score of the company’s share price it is worth noting that a $2 million capital raising at 15 cents per share completed in August was heavily oversubscribed, suggesting that investors recognised the company’s prospects.

It is worth noting that approximately 23 million shares were released from escrow in August, perhaps flooding the market with sellers and driving down the share price. The potential share overhang may need to clear before sustained share price momentum can be achieved.

Interestingly though, investment group Velasco S.A took advantage of the lower share price offered in the capital raising, increasing its stake from 6.1% to 11.7% by snaring 50% of the shares on issue at the time of the placement. 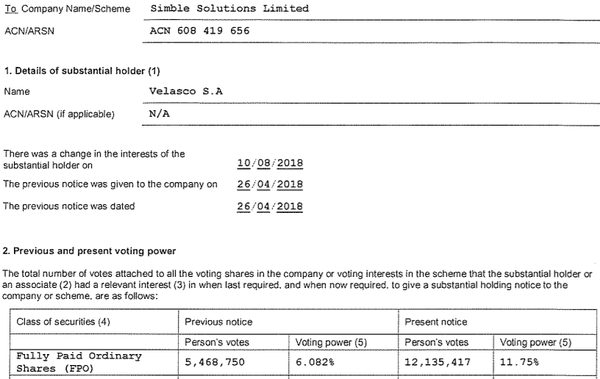 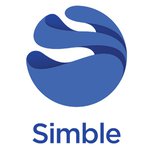