Shares in market leading technology agency, The Gruden Group (ASX: GGL) surged nearly 20% on Friday after the company provided an impressive quarterly update for the three months to March 31, 2017, which featured quarter on quarter revenue growth of 22% and $1.8 million in annualised cost reductions.

It should be noted that share trading patterns should not be used as the basis for an investment as they may or may not be replicated. GGL is an early stage play so seek professional financial advice if considering this stock for your portfolio.

Total revenues for the nine months to March 31, 2017 were $12.3 million, well in excess of the previous corresponding period and not far short of fiscal 2016 full-year income of $13 million.

The uptick in revenues were driven by contracts won in the first half of fiscal 2017, and the fact that GGL has gone on to secure further contracts with blue-chip clients in the first four months of 2017 suggests the company is poised to deliver strong year-on-year revenue growth.

The following graph demonstrates the incremental revenue growth that has occurred in the first quarter of fiscal 2016. 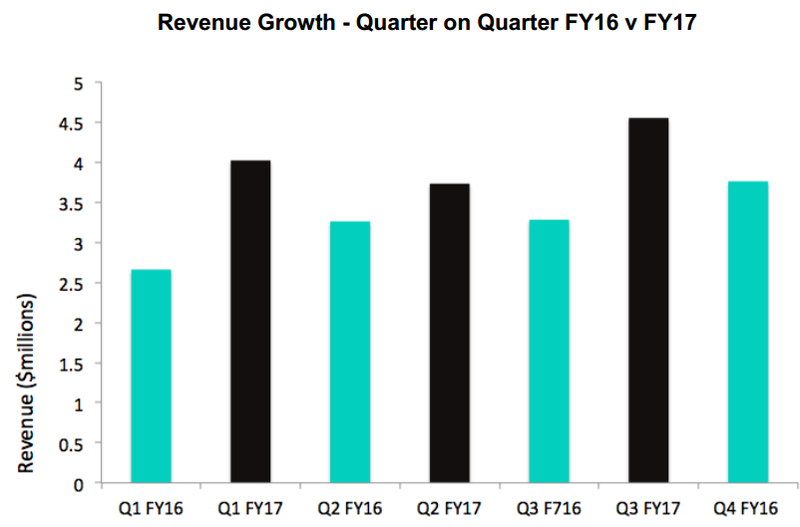 Putting a finer point on revenue sources, GGL’s Chief Executive Tim Parker said that contracts with the New South Wales Small Business Commissioner (OSBC), a re-contract with the New South Wales Department of Finance, Services and Innovation, as well as the provision of services to the Public Records Office of Victoria (PROV) made solid contributions, which in most cases should continue out to at least fiscal 2018.

Cash outflows related to operating activities decreased in the December quarter, a result of increased cash receipts from customers. GGL noted that its investment into mobileDEN had continued at circa $200,000 per month as it continued to enhance the platform by offering new features and capabilities.

It appears that this is already paying dividends with clients such as Red Rooster, Starbucks, Oporto, and Mad Mex coming on board. The mobileDEN ordering and payments platform was adopted by Red Rooster as it embarked on a substantial store rollout program in June last year. The platform is now in use at over 250 sites nationally, delivering licensing and transactional revenue.

The high profile partnership with Red Rooster’s owner, Quick Service Restaurant Holdings (QSRH) will see GGL continuing to drive innovation within the online ordering channel, particularly given that it has other fast food businesses operating under its banner.

It may also be significant that an ASX listing could be imminent which would effectively provide the company with greater access to capital and potentially fast track the group’s store expansion strategy.

Commenting on the company’s outlook for the remainder of fiscal 2017, Parker said, “Gruden continues to experience strong demand and recognition for its market leading Digital Transformation services, and our reputation and ability to secure new clients are driving the growth of the business in the second half of the financial year and beyond”.

Parker also noted that historically the second half of the financial year is usually stronger, and this trend is expected to be replicated in fiscal 2017. 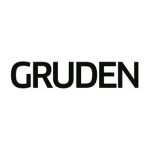