FYI Resources Ltd (ASX:FYI) has advised of an initial investment of more than $3 million by GEM Global Yield LLC SCS (GEM), an international group that intends to provide long term support and shareholder stability to FYI for the development of its high purity alumina (HPA) project.

GEM sees increasing shareholder value as FYI progresses the development of its HPA project strategy, and this has been evidenced by a particularly strong share price performance in recent months as the company has progressed HPA pilot trials in collaboration with Alcoa.

Between December and February, FYI’s shares increased 150%, and are currently trading at a premium of more than 100% relative to where they were less than two months ago.

The value of the placement announced today is $3.13 million, and this will be facilitated through the issue of 9.3 million shares under the company’s $80 million capital commitment facility with GEM.

This is the first draw-down on the GEM financing facility which has been in place since March last year.

The facility was specifically established to provide FYI with capital support for the development of its HPA project.

The company will issue 9.3 million fully paid ordinary shares at a price of 33.67 cents each calculated according to the terms of the capital commitment facility, under the ASX listing rule 7.1A placement capacity to raise gross proceeds of $3,131,310.

Proceeds from the share issue will be used to advance FYI's HPA project and costs of the issue.

Analytical results indicated more than 99.998% Al2O3 purity was consistently achieved with an average of 99.9986% Al2O3 purity surpassing expectations - just a whisker off the premium 5N product that has a grade of 99.999%.

The fact that some samples achieved results of 99.999% HPA is an outstanding outcome that surpassed both parties’ operational expectations, providing further validation of FYI’s innovative HPA flowsheet design.

Importantly, FYI has already released its definitive feasibility study (DFS), underlining the strong financial metrics for production of 4N HPA as outlined below. 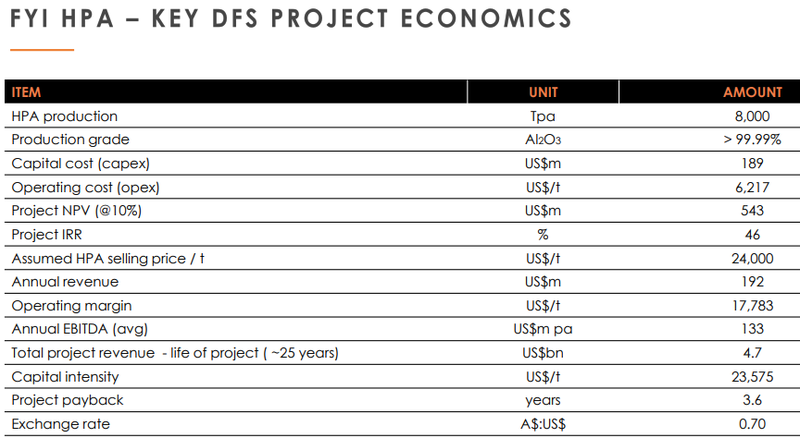 5N opens up new markets at double the price

HPA is increasingly becoming the primary sought-after input material for certain high-tech products principally for its unique properties, characteristics and chemical properties that address that applications high specification requirements such as LED’s and other sapphire glass products.

However, the longer-term driver for HPA, with forecasts of compound annual growth exceeding 17% is the outlook for the burgeoning electric vehicle and static energy storage markets where the primary function is in the use as a separator material between the anode and cathode in batteries to increase power, functionality and safety of the battery cells.

FYI is positioning itself to be a significant producer of 4N and 5N HPA in the rapidly developing high-tech product markets.

The 4N product fetches approximately US$25,000 per tonne, while customers in the electric vehicle and energy storage industries are paying in the vicinity of US$50,000 per tonne for 5N HPA.

Consequently, should ongoing pilot plant trials confirm that FYI can produce significant quantities of 5N this would provide a substantial uplift in the group’s valuation, and indeed its share price - this is obviously the outcome that GEM is banking on.