engage:BDR (ASX:EN1; EN1O) has achieved four new programmatic integrations, pushing the total number up to 195 and effectively meeting management’s goal of 194 some six months ahead of time.

This has prompted the company to reset its goal to include an additional 20 new integrations for the balance of the year. 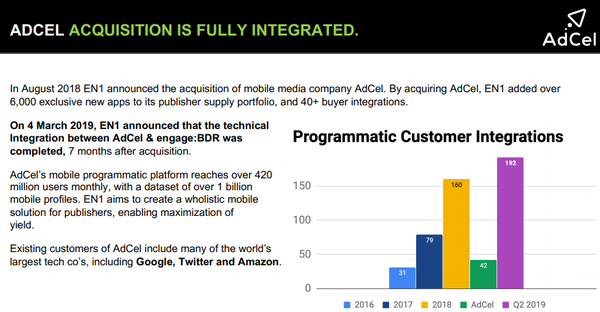 Management acknowledged the importance of being aligned with new partners who are leaders in the US programmatic marketplace and have significant influence in the industry today.

In other promising news, AdCel released its monetisation SDK (software development kit) for the Unreal Engine, ahead of schedule.

Unreal Engine is the 3D game development platform by the makers of the world famous Fortnite game.

AdCel is the second monetisation plugin to be released for Unreal Engine 4.

Since Unreal Engine is currently one of the largest 3D game platforms in the world, management feels the AdCel integration is a significant and immediate revenue opportunity for EN1.

AdCel was the second monetisation plugin to be deployed for this platform as well.

Monetisation plugins are native on mobile and television devices within the app’s SDKs, creating advertising opportunities.

Having direct integrations, or plugins, with development platforms enables app publishers to quickly, in an automated capacity, integrate AdCel within their apps.

AdCel expects to onboard a significant volume of new publishers in 2019 through these two channels, further growing revenue off a relatively fixed operating expenses base.