DUO to emerge from the cloud: APP

APP Securities has slapped a 12-month price target on Dourado Resources (soon to be Zyber Holdings) of 1.7c per share and forecast the new company to rake in $15 million in yearly revenue by 2018.

With the renaming of Dourado (ASX:DUO) set to take place after the company’s AGM early next week, analysts have started taking note.

DUO has undertaken a reverse takeover of Zyber, a Canadian mobile security company based in Vancouver focused on the security of cloud-based mobile sharing, taking on the likes of Dropbox in the process.

While DUO shares are currently riding at around 1.1c, APP is expecting the price to go up to 1.7c, slapping a buy recommendation on the stock.

It has also forecast three years of revenue flow for Zyber, with the securities house expecting revenue to grow revenue from nothing to $15 million within three years.

It is also expecting turnaround from red to black for the company’s EBITDA and NPAT.

The merged entity is attempting to capture a slice of an expected multi-billion dollar online security market.

It is attempting to build a centralised platform to securely store files in the cloud, and to be able to share those files across any device securely.

While cloud computing has been heralded as a step-change in the way companies do business, some have been wary of handing overs security protocols on their data to a central processor.

So far, existing fragmented solutions such as Dropbox or One Drive have tried to step up, but neither has been able to handle the whole enchilada.

Zyber’s play is to develop a secure platform which can be used to exchange files with anybody on any device. 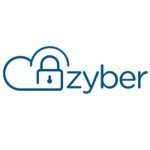