DigitalX’s (ASX: DCC) update to AirPocket, which will allow money transfers will go live on Saturday, March 4, 2017 (US time), with the app update available for Android users at that time. The Apple version will be able to be updated shortly thereafter.

This is an early stage play, however, and investors considering this stock for their portfolio should seek professional financial advice before making an investment decision.

To provide a very basic explanation of the technology, a blockchain is a public ledger of all Bitcoin transactions that have been executed. It is constantly growing as ‘completed’ blocks are added to it with a new set of recordings. 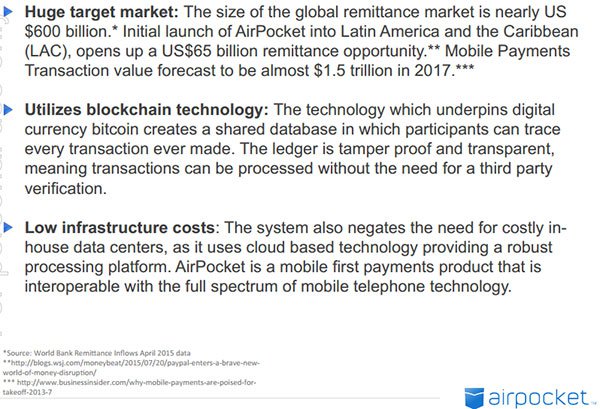 The AirPocket interface has been redesigned ahead of this launch to align the app’s branding, messaging and aesthetics with the values of AirPocket’s initial US-Latino target audience. As part of this launch, the AirPocket.com landing page has also been redesigned for consistency across the marketing and distribution campaigns to support stronger brand recognition as the product grows.

Commenting on DCC’s growth strategy, Chief Executive Leigh Travers said, “AirPocket will be driven by its use as a consumer mobile application, with AirPocket.com to act as an additional portal to enable new users to register as well as enabling existing users to view transaction records, with money transfer functionality expected in the June Quarter”.

In referring to recent data, management noted that the imminent launch positions AirPocket in the world’s biggest remittance market which boasts three times more remittance transactions than the next highest placed country.

USA to Mexico a US$24 billion money transfer corridor

USA-to-Mexico is the world’s largest money transfer corridor, with over US$24 billion in funds sent in 2015 according to pewglobal.org. Initial off-line marketing will target Houston and Dallas where high Mexican immigrant populations can be most economically targeted due to geographic concentration.

With a view to reducing CAC, as well as syncing with the introduction of the remittance features into AirPocket, DCC is also creating a new digital marketing channel to provide financial and immigration education to its user base.

Management anticipates this channel could also potentially provide a revenue generating opportunity through cross-marketing financial and immigration services to its target market. DCC is working with qualified advisors from New York to assist with the roll-out of this platform, and management will provide an update in March on its progress.

In a separate but related development, DCC has signed a Memorandum of Understanding (MOU) with BlueQ, a private Australian company that enables individuals and organizations to digitise and safely store their academic, professional and other verified qualifications. This will assist the group in assessing the effectiveness of its AirID product in this field.

Under the MOU, DCC will grant BlueQ access to AirID to investigate how it can potentially be used in the storage and delivery of academic, professional and other verified qualification data. DCC has filed patents on a number of blockchain and blockchain-like database technology functions relating to the AirID product, and the MOU will investigate using AirID to create and store user data on a blockchain who can then grant permissioned access to the data instantly via the app.

While AirID was originally developed as a core security plank of AirPocket, DCC has identified additional uses and potential markets for the technology. On this note, management plans to release the enterprise-grade AirID SDK in the second half of 2017.