Shares in Department 13 International (ASX: D13) rallied strongly on Wednesday after the company announced that its proprietary counter drone system, Mesmer, was being demonstrated live at the US Department of Defence Black Dart event this week.

Black Dart is an invitation only event where the US Department of Defence conducts evaluation exercise programs for premier counter drone technology is that detect, identify, track and defeat or disable Unmanned Aerial Systems (UAS).

As can be seen in the five major goals outlined by management for achievement in fiscal 2016, the company is well advanced in meeting milestones, one of which includes validation of its technology at the Black Dart event. 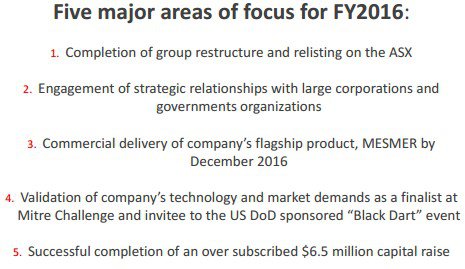 In commenting on this important upcoming opportunity, D13 Chief Executive Jonathan Hunter said, “Black Dart will allow D13 to showcase its dynamic Counter Drone Solution and finalise our path to commercialisation for Version 1 Mesmer, a product with the capability to take positive control of commercial drones”.

Hunter highlighted that Mesmer provides an affordable and effective first line of defence for the detection and identification of unauthorised drones, as well as being able to facilitate the positive control to safe land a drone.

One of the significant points of difference offered by Mesmer is the fact that it does not employ kinetic attacks or jamming.

To provide some background, Department 13 was founded in 2010 by a team of former military operators, scientists and engineers who given their background were well equipped to understand both the practical and technical capabilities required to develop an effective counter drone device.

Importantly, there are numerous revenue streams open to D13 (highlighted below) as it is developing cutting-edge software and communication systems that have the potential to transform the networking and communication fields, as well as current applications in drone defence, mobile phone IT security and secure enhanced android phone systems. 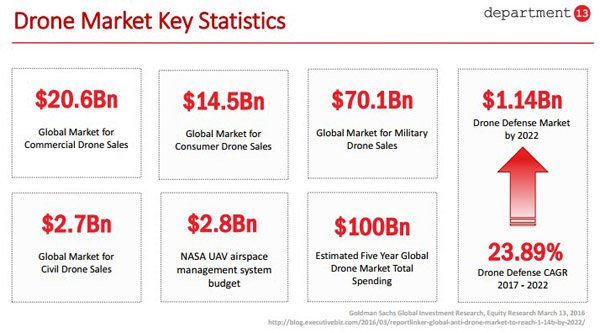 Consequently, with 11 patents and 14 patents applications in the development of wireless protocol manipulation and communication networking software, D13 has the potential to target multiple markets across the civil, military and commercial sectors.