CropLogic Ltd (ASX:CLI) has signed a Letter of Intent (LOI) with Boring Seed Company of Oregon USA, an initiative that could see the group establish a hemp trial farm in Australia, similar to the one it is operating in Oregon.

The award-winning global agronomy, farm management and agtech company is well supported in the US, having established itself as a credible authority in relation to agricultural practices across a broad range of crops.

After launching its product into Washington State in 2017, CropLogic is now servicing a significant portion of horticultural growers in this region, with a market share as high as 30% in some crops.

The company offers growers of irrigated crops digital agricultural technology expertise based upon scientific research and delivered with cutting edge technology – science, agronomy and technology interwoven into an expert system for decision support.

After establishing itself in the broader horticultural sector, CropLogic gained approval to establish a 500 acre hemp trial farm in Oregon where the crop is well advanced. 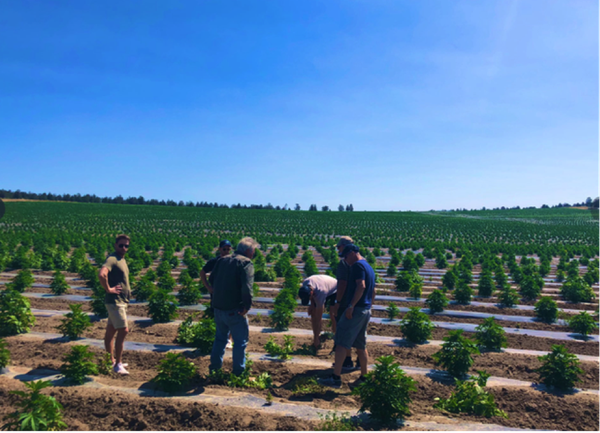 As well as generating significant revenues from crop sales towards the end of the year, the hemp project has provided CropLogic with a valuable opportunity to showcase its agricultural management systems and expertise.

Given CropLogic’s technology was transferable into other countries and industries outside the group’s markets in Australia, it makes sense to revisit Australia, targeting a country and market it knows well in expanding its presence in the hemp farming industry.

Harking back to the collaboration with Boring Seed, that group has developed the T2 hemp strain being grown on the CropLogic’s Oregon Trial Hemp Farm.

Distribution of this strain and other Boring Hemp genetics will be formalised in an appropriate distribution agreement.

Considering that CBD hemp cultivation has been legal in the state of Oregon since 2015, it is thought that Oregon may have superior CBD producing hemp genetics to other regions, such as Australia and New Zealand, where to date the focus of hemp production has predominately been for fibre and seed for consumption.

The investigation will consider a Hemp Trial Farm of up to 100 acres.

Any eventual Australian Hemp Trial Farm and distribution and/or cultivation of Oregon hemp genetics will be subject to satisfactory regulatory approvals and the findings of this investigation.

Commenting on the prospects of such a venture, chief executive James Cooper-Jones said, “We have promising hemp cultivation operations currently underway in Central Oregon, US.”

“Much of this could be attributed to CropLogic’s agronomy, farm management and agtech expertise and perhaps the superior genetics found in Oregon.

‘’As such, CropLogic is now excited to investigate how this proprietary agronomic knowledge and Oregonian genetics may benefit the Australian and New Zealand hemp industry.”

Given CropLogic estimates it could generate approximately $50 million in biomass sales from the Oregon Trial Farm towards the end of this year, should the company embark on a similar strategy in Australia it could be very lucrative.

Consequently, it is a share price catalyst to look out for, particularly given that the company’s current market capitalisation of approximately $26 million fails to reflect the group’s anticipated income in the next six months.