Global agricultural technology group, CropLogic Ltd (ASX:CLI), informed the market on Wednesday morning that it had more than trebled the size of its Industrial Hemp Trial Farm in Central Oregon (US), a development that should result in a substantial increase in income and profits.

Based on current metrics, management suggested that profits of more than $30 million could be generated from potential sales of more than $40 million.

The land size has increased from 150 acres to 500 acres under lease, allowing the company to further vertically integrate its agronomy and agtech expertise.

CropLogic has significant experience in the region having launched its product into Washington State, US in 2017, and expanded into North Oregon in 2018.

The company is servicing a significant portion of horticultural growers in this region, with a market share as high as 30% in some crops.

In discussing the benefits of this development, James Cooper-Jones, CropLogic chief executive said, “Although this Trial Farm of 500 acres is modest when compared with the approximate 100,000 acres CropLogic services in Washington State each year, we feel the varying growing environments presents an opportunity for CropLogic to further vertically integrate its agronomy and agtech expertise, greatly enhancing our scientific knowledge of not only an emerging crop such as industrial hemp, but also generally.”

The increase in size will enable CropLogic to evaluate and produce reference data for different growing conditions such as soil types, land contours and elevations in order to optimise crop yields.

Discussions with local hemp growers confirmed the need for representative data across various conditions, and a variety of irrigation systems and genetics will also be used.

These elements enable CropLogic to validate its agronomy expertise and suite of ag-tech technologies in a variety of scenarios, adding greatly to the company’s proprietary scientific knowledge.

Management believes this knowledge can be applied to CropLogic’s customers not only in the US and Australia, but also in the emerging industrial hemp market outside these areas.

CropLogic’s drone technology will also be utilised this season at the Industrial Hemp Trial Farm.

Drone technology is particularly applicable to high value crops such as industrial hemp, but interest has also been shown by other CropLogic clients in the grape industry in Australia and the apple and row crop industry in Washington State.

Management expects production rates will be in a range between 800,000 and 1.1 million pounds of industrial hemp biomass for the total 500 acres.

The price of hemp biomass varies between grade and variety, but prices of US$35 and US$45 per pound were reported in CropLogic’s recent investigations into the industry. 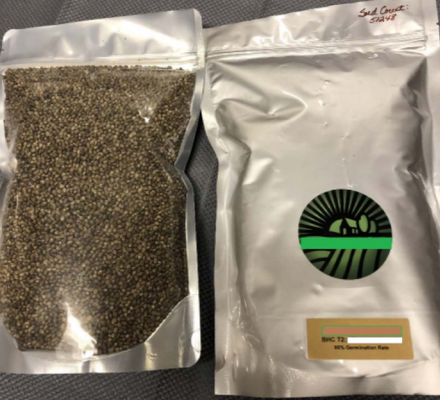 The indicative cost to produce the Industrial Hemp Biomass is expected to be in a range between US$5.00 per pound and US$7.00 per pound.

This could generate Australian denominated profits in a range between $31 million and $58 million.

CropLogic has strengthened its balance sheet in order to fund production, raising $3.0 million through a placement at 4.0 cents per share and arranging a $2.8 million debt facility.

The placement price is in line with the company’s last closing price which was a near nine-month high.

This demonstrates strong support for the company’s business and management, suggesting that there is also reasonable confidence surrounding the income and profit guidance.