CropLogic excels on the agtech and hemp growing fronts

While CropLogic Ltd (ASX:CLI) had plenty of positive news to reflect on yesterday when releasing its report for the three months to June 30, the big news from a financial perspective is likely to emerge in the December half when the group harvests its hemp crop from the company’s farm in Central Oregon.

Importantly though, as a global agronomy, farm management and agtech company, CropLogic also made significant progress in rolling out its real time crop management technology in the three months to 30 June, 2019.

The end of the June quarter marks the approximate midway point of the North American growing season.

CropLogic has a number of growth targets in the US, particularly in Washington State, Idaho and Oregon.

The company’s Washington State operations commenced during the reporting period, with the season’s first CropLogic realTime site set up and providing real-time data.

Current realTime orders represent a 50% increase in Washington State, as compared to 2018 figures.

Two new sales zones were established to target growers in the US$2.8 billion apple and hops industry.

CropLogic realTime was trialled with apple and hop growers in the 2018 season after providing agronomy services for a period of time.

The systems were found to be robust and responsive, and grower response was positive.

The opening of these two zones presents a total addressable market to CropLogic’s Washington State operations of between $9.3 million and $18.6 million in Australian dollar terms.

Installations to date of CropLogic realTime in these new sales zones have been better than expected.

One of the stated aims of CropLogic’s Hemp Trial Farm in Central Oregon, operated by the company’s wholly owned subsidiary LogicalCropping, was to demonstrate CropLogic’s agronomy, farm management and agtech expertise to the emerging US hemp market.

The first take up of this technology is in North Eastern Oregon, and it will be serviced out of CropLogic’s Washington State office.

The company currently services a variety of crops in Washington State, including apples, cherries, wine grapes, potatoes and hops.

The addition of hemp to this list is an endorsement of the robustness and versatility of CropLogic’s realTime technology.

Another first in Idaho

CropLogic has completed its first realTime installation in Idaho.

Management began to build the company’s presence in Idaho in October 2018 in preparation for the 2019 growing season by opening an office in Twin Falls, Idaho and appointing key staff, including a regional manager and an Idaho based sales agronomist.

Idaho, which neighbours Washington State, is the second largest irrigation state in the US and the largest in potato production.

The state is also the third largest in terms of dairy herd numbers and the second largest in milk production.

Dairy production in Idaho is almost all feed lot, resulting in strong demand for hay which is brought to feed lot facilities.

Idaho is a comparatively dry state and therefore almost all crop production, including potato and hay production, is done via irrigation.

As a key input and cost into their growing cycle, growers are keenly interested in monitoring their water use and soil moisture, creating strong demand for CropLogic realTime.

Interest grows in CropLogic’s agronomy, farm management and agtech services in Oregon proper, a key target region for the group.

CropLogic’s Hemp Trial Farm is not only a platform to trial a variety of hemp genetics and growing environments, but it is also a platform to demonstrate the company’s agronomy, farm management and agtech expertise.

As the Hemp Trial Farm project progresses, so does the interest in CropLogic.

This includes several sales enquires for CropLogic realTime in the Willamette Valley and as far south as the Medford region of Oregon.

Management conservatively estimates that the 500-acre farm will be able to produce approximately 800,000 pounds of industrial hemp biomass per annum.

This follows other producers within the region, who can reach up to 1.1 million pounds per annum on a similar size.

The hemp biomass market price is in a range between US$35 and US$45 per pound, and it has been ascertained from both management’s own investigations and through reference to third party indices for hemp market spot prices in the region that this would be a reasonable estimate to use in gauging the earnings that could be generated from the sale of this year’s crop.

Crunching the numbers, it would appear that underlying earnings of approximately $40 million is achievable.

This sees the group attractively priced relative to its market capitalisation of $25 million.

The undervaluation quite likely accounts for the company’s strong share price performance which as indicated below recently saw it hit a 12 month high of 7.6 cents. 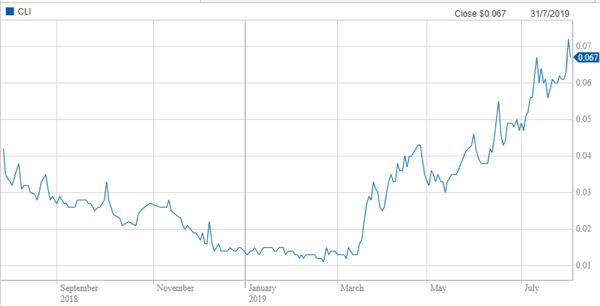 However, given CropLogic’s heavily discounted enterprise value to underlying earnings multiple relative to other companies in the agricultural sector, and in particular those leveraged to the burgeoning hemp industry, the group could well experience further share price momentum, particularly as the harvest and sales period begins towards the end of 2019.