The Schemes and the related arrangements for the various other classes of unlisted Creso Pharma securities imply a total equity value of $122 million for Creso Pharma.

Shareholders must have been rubbing their hands with glee as the company has been running on hype for the last two years with only nominal revenues just starting to trickle in as indicated below.

The fiscal 2018 bottom line looks fairly strained with the company having delivered a loss of $16.8 million from ordinary activities.

The company has been very big on doing deals, launching products and projecting developments in the pipeline, but when the rubber hits the road it comes down to whether these initiatives are at least generating revenues with the prospect of some of that income hitting the bottom line in the relative near-term.

The underperformance was reflected in the company’s share price movements as indicated below. 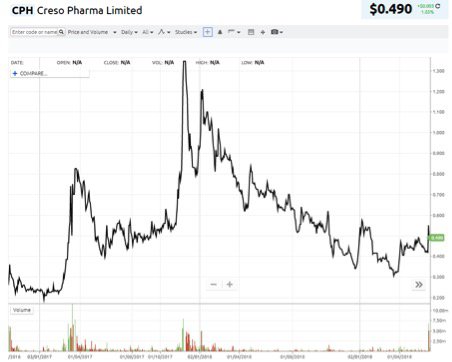 It has been a rollercoaster ride for shareholders with the company’s shares increasing about five-fold in 2017 to hit a high of $1.34, but it has been all downhill since then with the group trading as low as 30 cents per share in March.

Fortunately for Creso, PharmaCielo has come to the rescue with an offer of 63 cents per share (based on the three day volume weighted average price of PharmaCielo shares for the three trading days ending June 4, 2019 of CAD$7.6166/AUD$8.1261 when using the exchange rate of AUD$0.9373/CAD$1.00 (PCLO VWAP).

Looking at the broader sector though, mergers and acquisitions in any market segment is often the start of industry consolidation, marking the commencement of significant corporate activity.

Obviously, finding value is front and centre when doing deals, which brings one company in CropLogic (ASX:CLI) into the frame.

As a backdrop, CropLogic is a global agricultural technology company with operations in Australia and the US.

Crunching the numbers on CropLogic

One of CropLogic’s key advantages is that the group has been operating in the agricultural industry for many years, providing high-tech equipment and expertise to growers of a wide range of crops. 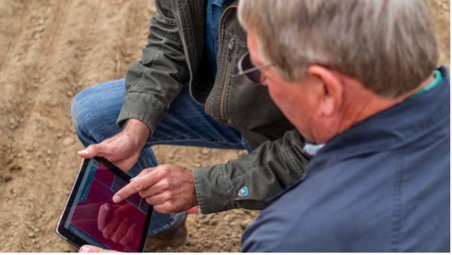 As indicated below, the company is already generating revenues from its established businesses.

In ballpark terms, CropLogic’s revenues for the 12 months to March 31, 2019 were about four times that of Creso’s and while its bottom line reflected a loss, it was more than $12 million less than Creso’s.

It is important to note that one-off ASX listing expenses placed a drag on CropLogic’s earnings for the 12 months to March 31, 2019.

CropLogic is currently servicing a significant portion of horticultural growers in the Washington State region after launching in 2017, with a market share as high as 30% in some crops.

The company offers growers of irrigated crops digital agricultural technology expertise based upon scientific research and delivered with cutting edge technology - science, agronomy and technology interwoven into an expert system for decision support.

From this platform came the opportunity to service the hemp industry, and progress its business to the stage where it is now in the process of planting a 500 hectare hemp crop due for harvest towards the end of the year. 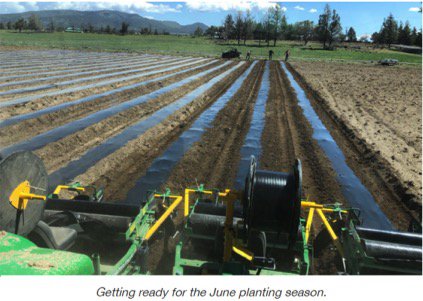 Consequently, when we talk about near-term earnings visibility, CropLogic will be generating substantial revenues from the sale of its hemp crop in the next six months, or at the latest, in early 2020.

Management conservatively estimates that the 500 acre farm will be able to produce in the order of 800,000 pounds of industrial hemp biomass per annum, having considered other producers within the region that can reach up to 1.1 million pounds per annum on a similar site.

Projections point to pre-tax profit of about $40 million

The hemp biomass market price of US$35.00 to US$45.00 per pound has been ascertained from both the company’s own investigations and is in line with third party indices for hemp market spot prices in the region.

Similarly, hemp production costs have been ascertained from the company’s own investigations and are supported by third party research suggesting a cost of US$5.00 to US$7.00 per pound as a conservative production cost estimate.

The yield, market price, and production cost figures are statements of fact which are supported by external research and analysis and from information and farm plans compiled by independent individuals and CropLogic’s advisory and management team who possess the relative competencies in relation to operations of this nature.

Based on annual industrial hemp production of 800,000 pounds, a mid-range market price of US$40.00 per pound, a mid-range cost of US$6.00 per pound and an AUD:USD exchange rate of US$0.70, the 500 acre farm should conservatively generate a pre-tax profit in the order of $40 million.

This is an earnings profile that neither Creso nor most other ASX listed cannabis players can match.

It’s all in the valuation

Consequently, one would expect a potential suitor would pay a significant premium for CropLogic compared with Creso.

However, CropLogic’s attributed valuation relative to its current share price is arguably based on fiscal 2019 metrics, though even applying those numbers the company still appears attractively priced.

CropLogic’s current enterprise value is $13 million, approximately 10% of the value attributed to Creso Pharma relative to the acquisition price.

CropLogic’s pre-tax profit in fiscal 2020 should be about three times the group’s enterprise value.

Imagine snapping up CropLogic for $40 million less tax and completely recouping your investment in the space of 12 months - these are the sums that potential suitors will be doing in the relatively near-term.

Harvest could be the catalyst

As far as timing goes, it is worth noting that the tilt at Creso emerged only a fortnight after the group announced the harvest of its first Canadian cannabis crop.

It’s no different to opening a toll road, pouring the first ounce of gold or announcing the first weeks sales of a new iPhone - investors look for tangible evidence of financial worth.

However, in the case of Creso, this was the financial impact as reported in ASX release dated May 23, 2019:

“Under the tie-up, TerrAsend has agreed to purchase 100 kilogram of cannabis flower per month, estimated to be worth approximately C$6 million of revenue annually.”

Not quite as compelling as a pre-tax profit of $40 million.

The question remains whether the old adage, ‘you reap what you sow’ will see CropLogic redefined and revalued over the next 12 months.