APP analyst, Russell Wright is impressed with IVO’s growth to date as well as its prospects for growing revenues through leveraging both existing and new partnerships. The broker expects IVO to announce a number of key partnerships with market leading organisations that will significantly strengthen the distribution channels for both its Insights Visitor and SpotLite products.

Insights Retail revenue is expected to grow materially through the engagement with major retailer and brand groups, assisted also by entry into new market verticals and geographic regions.

Wright also noted that SpotLite had secured local partnerships with eBay and GoDaddy, which will also be leveraged internationally. This is likely to be the springboard for the establishment of other partnerships which are purportedly in the pipeline and should be finalised within the next few months.

When findeed.com discussed Wright’s views on upcoming developments with the group’s Managing Director, Gary Cohen he confirmed the likelihood of new contracts being negotiated in the near term.

He also pointed to some of the drivers which are underpinning demand for IVO’s products in saying, “We are witnessing growing demand from companies wanting enhanced data and predictive analytics capabilities, especially from bricks and mortar retailers and shopping malls who need to combat the growing threat of online sales”.

Further to this, Cohen said, “Our tendering pipeline reflects this demand and we expect to see more contracts materialising shortly”. Given this backdrop Cohen said that he feels the valuation attributed to IVO by APP is well supported by the company’s growing and robust tendering pipeline.

APP has initiated coverage of IVO with a buy recommendation and a target price of 2.5 cents, representing upside of nearly 130% to Wednesday’s opening price of 1.1 cents.

However, it should be noted that broker projections and price targets are only estimates and may not be met. Those considering this stock should seek independent financial advice.

As indicated by APP’s projections outlined below, IVO is essentially a 2018/2019 story with revenues to grow on the back of acquisitions made in the last 12 months, as well as previously mentioned expansionary initiatives. This perhaps explains share price weakness as investors grapple with understanding how emerging technologies will gain traction in the medium term. 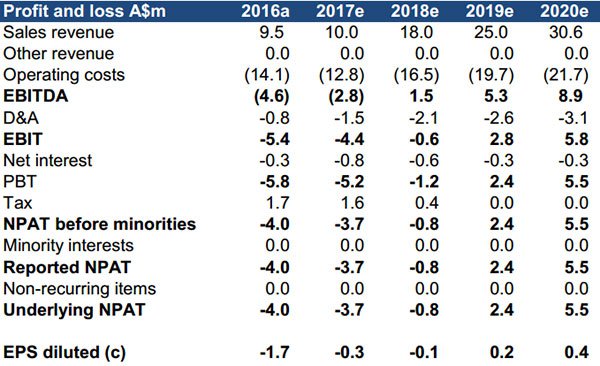 As indicated above, Wright is forecasting revenues to increase 150% from $10 million to $25 million between 2017 and 2019. In fiscal 2019 he is forecasting group EBITDA of $5.3 million and earnings per share of 0.2 cents. Based on IVO’s current share price this implies a PE multiple of 5.5.

As well as being conservatively valued, the other key factor to bear in mind with IVO is its increasing levels of recurring income, providing earnings predictability which is important for smaller emerging companies.

This is particularly the case with IVO’s Sprooki business as indicated below. 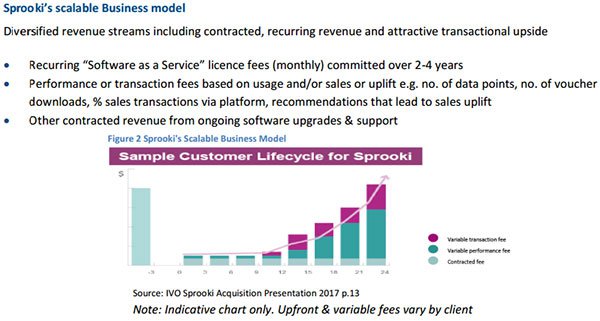