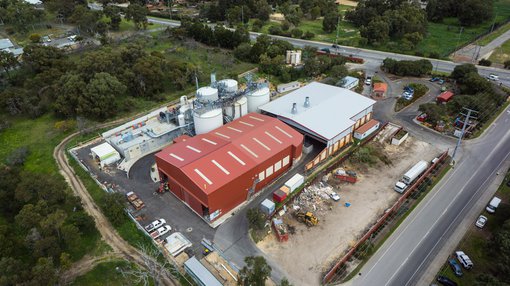 AnaeCo Ltd (ASX:ANQ) is on the cusp of entering the final ramp up phase of its waste disposal technology demonstration plant in Perth, Western Australia.

ANQ has developed a patented urban waste disposal method called the AnaeCo SystemTM which separates municipal solid waste (MSW) into solid and organic material. The solids are recycled while organic waste is broken down into fertiliser and natural gas which can power the process.

ANQ has introduced 65 tonnes of organic material separated from MSW into one of the Shenton Park pilot plant’s three closed bio-conversion containment vessels to begin the ‘wet commissioning’ phase.

Inside, the material will undergo what’s called an ‘anaerobic process’ for three weeks to produce compost. ANQ will use this phase to test the containment vessel and its related machinery and control systems while also commissioning the other two vessels.

Once complete, ANQ says it will trial its anaerobic digestion process, following the anaerobic process within the AnaeCo SystemTM. This involves the composted organic material being mixed with microorganisms that further break it down and produce biogas.

Seed batches of anaerobic biology are being prepared at the site. ANQ will also test transitioning of each of the containment vessels from anaerobic processing to anaerobic digestion and back again — the method developed for the AnaeCo SystemTM.

Urban waste management is a global industry worth around $400BN and ANQ has signed memorandums of understanding for its technology with entities in several countries including China, India and Canada.

Final ramp up in sight

Work to establish the material recovery facility (MRF) at the Shenton Park plant is on schedule for the final ramp up phase with some adjustments being made to a screen that separates glass and grit from organic material.

Any waste must first pass through the MRF to separate solid material from organic. ANQ says it has adjusted the screen and mesh sizes in the pilot plant’s wet density separation system which uses water to filter the waste. ANQ is aiming to increase the throughput of the MRF from 70 tonnes to at least 730 tonnes over an 18 week period.

ANQ has spent nearly 15 years and $120M developing the AnaeCo SystemTM and David Lymburn, chief executive, says reaching the wet commissioning phase is a great milestone for the company. “Commencement of ramp-up is now firmly in sight and we are really excited to be getting so close to running the whole AnaeCo SystemTM at this plant.”

MyFiziq teams up with Tinjoy as it eyes off China