Diversified media group, engage:BDR (ASX:EN1), has amended its convertible securities agreement with CST Investment Fund to provide for raising up to US$5.8 million ($7 million) on top of the US$750,000 already raised.

The revised terms provide immediate funding of an additional US$800,000, which would immediately increase EN1’s revenue through additional publisher payments for incremental revenue growth.

This is a significant development for the group as its strategy is geared towards expanding its publisher network.

For the specifics of the proposed agreement, see EN1’s announcement this morning.

By way of background, EN1 is a cross-device advertising solution company, consistently recognised for powering integrated display and video ad experiences. The world’s top advertisers and comScore top 1000 publishers depend on its innovative advertising and managed service solutions to drive towards individualised KPIs.

EN1’s technology was built with the publisher in mind, and management believes that this accounts for the company’s achievements in maintaining and growing its relationships over the years.

On a programmatic basis, EN1’s artificial intelligence (AI) algorithms identify valuable advertising inventory and predict what the market is willing to pay for inventory in real-time.

Part of the service is to highlight a product’s value, enhancing returns for the seller, while also improving its own margins.

As indicated below, the model is relatively simple as engage:BDR buys the inventory on a risk-free basis and sells it immediately to the highest bidder, as identified by its advertising program.

Shares surge on back of new programmatic partnerships

Combined with existing revenues from integrations executed in September and October last year, EN1 is poised to generate strong revenue growth in fiscal 2019.

In an environment where emerging tech stocks often struggle to generate revenues, it wasn’t surprising to see EN1 shares take off on the back of this news.

Shares in the group increased from 1.9 cents on the day prior to the announcement to hit a high of 5.4 cents, representing an increase of 185%, and pushing up towards its three month high. 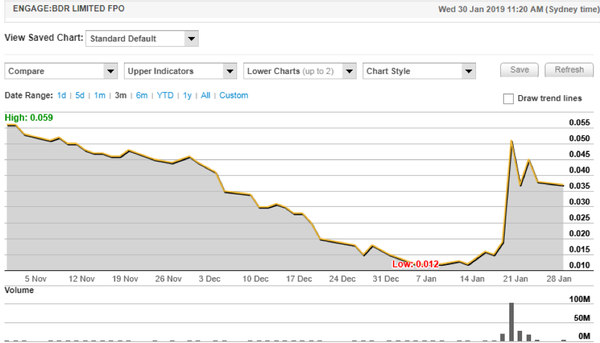 While there appeared to be some profit-taking towards the end of trading on that day, the company’s shares are still up approximately 100% since the news was announced, suggesting that EN1 is more than just a speculative play.

In the US, connected television is a prominent emerging sector into which video marketing budgets are being funnelled.

ThirdPresence is an important integration for EN1 because of its experience, knowledge and expansive reach within the connected television space.

Over 90% of EN1’s revenue is currently flowing from the US. However, as the company continues to grow, management expects the possibilities of expanding internationally will be more prominent.