Zinc of Ireland NL (ASX:ZMI) has released promising drilling results from areas adjacent to the McGregor and Shamrock deposits that form part of its Kildare Zinc Project in Ireland.

Before looking more closely at the results released today, it is worthwhile gaining an appreciation of ZMI’s strategy leading into the drilling campaign as it outlines both the geology of the area and management’s expertise in targeting certain zones.

The following map will assist in providing an understanding of the areas being targeted by ZMI as it shows where the drilling is being conducted relative to established mineralisation. 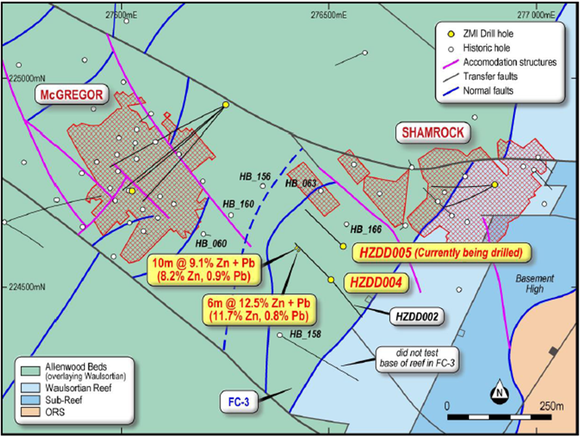 Following the drilling of HZDD002, the management recognised the potential for FC-3 (fault compartment) to host base of reef style zinc-lead mineralisation and subsequently HZDD004 was completed from the same drill pad, targeting the centre of FC-3.

HZDD002 did not test the base of reef in FC-3 due to faulting but a range of very encouraging indications were encountered, leading the company to drill HZDD004.

This indicated promising potential for additional zinc mineralisation within FC-3 which lies approximately 250 metres east of the McGregor zone and 200 metres south-west of the Shamrock zone.

Providing an insight into how large this resource could be, the fault compartments which host the McGregor and Shamrock components of the resource (9 million tonnes at 9.5% zinc+lead) are approximately 160,000 square metres and 127,000 square metres respectively.

Mineralisation open in all directions

As indicated above, HZDD004 intersected the base of reef position approximately in the centre of FC-3.

Mineralisation is open in all directions, including 300 metres to the south before the bounding accommodation fault structure and transfer fault are encountered.

As such, drilling around HZDD004 will step out towards the faults to test the extent of mineralisation within FC-3.

HZDD004 was drilled at 75 degrees towards the north-west and intersected the expected stratigraphy with the Waulsortian Reef encountered at 184 metres until entering into the subreef at 420 metres.

Executive director, Patrick Corr explained the significance of the broader mineralised body in saying, ‘’It is of note that HZDD004 also intersected zinc mineralisation higher in the stratigraphic sequence between 219 metres and 237 metres (diluted overall intersection of 18 metres at 1.8% zinc, including 4 metres at 4.4% zinc from approximately 230 metres).

All intersections have been reported as downhole widths, which given the drill hole orientation and the overall low angle of bedding towards the south east, would mean that reported intervals are close to true widths.

As a point of reference, a 10% zinc grade within the McGregor zone would have a bulk density of approximately 3.3 tonnes per cubic metre.

Drilling of a follow-up diamond drill hole HZDD005 has commenced.

The drill hole is targeting the base of reef position approximately 90 metres to the north from the HZDD004 intersection within FC-3.

ZMI’s shares spiked 50% in July as the company began drilling at the Kildare Project and released an updated Mineral Resource Estimate.

With continued exploration results being released in the near term there is the prospect of maintaining this share price momentum.

While the zinc price has retraced from peak levels earlier in the year, it is still hovering around the midpoint of its long-term range.

Furthermore, support appears to be building just above the US$1.00 per pound mark, and this could well be the platform for a rally given that five-year London Metals Exchange zinc warehouse stock levels are at a near record low.

It is worth noting that the steep fall in 2016/2017 as indicated in the following chart underpinned a strong rally in the zinc price which saw it increase from around US$0.70 per pound to US$1.60 per pound during that period. 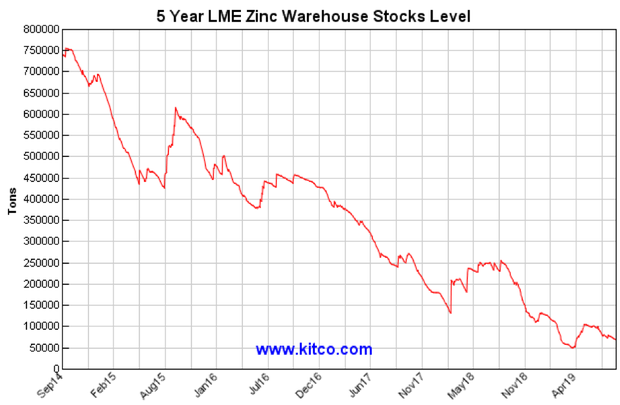 Industry dynamics should work in ZMI’s favour given there is an anticipated reduction in the supply of zinc concentrate of approximately 400,000 tonnes by 2021 which can partly be attributed to the closure of multiple zinc smelters across North America and a decrease in production from China.