Zinc of Ireland NL (ASX:ZMI) has released some promising drilling results that point to the immediate resource growth potential of its flagship Kildare Zinc Project.

The results from the base of Waulsortian Reef, part of the FC-3 zone that currently ranks as the highest priority fault compartment within the Allenwood Graben. Results from this area are likely to contribute significantly in growing the resource at ZMI’s Kildare Zinc Project.

This builds on other successful drilling, which combined with the buoyant lead price has underpinned a 40% increase in ZMI’s shares since July.

From a geological perspective this is based on the current standard intersection cut off algorithm of 5.5% zinc equivalent, four metre minimum intersection width and four metre maximum continuous internal dilution, which continues to confirm that a volumetrically significant mineralised system has been intersected.

These latest results are particularly impressive, as the high-grade mineralisation in the FC-3 region situated at the southern extremity as illustrated below is now extended over approximately 150 metres north-south, whilst remaining open in all directions. 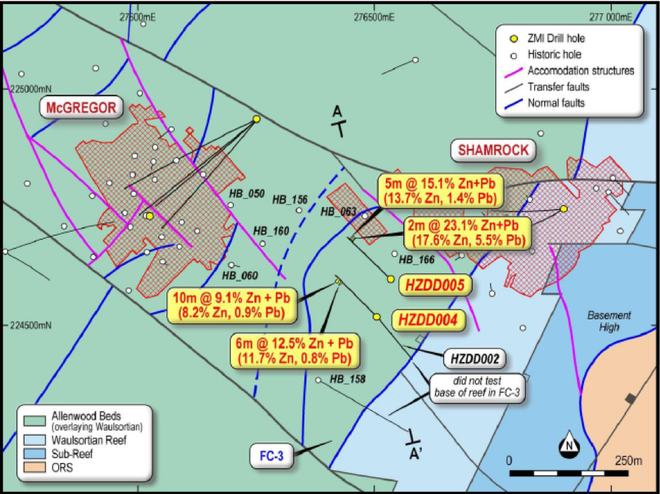 There is also the potential that the zinc-lead mineralisation intersected in FC-3 connects the currently defined McGregor and Shamrock resources which lie to the north.

“High-grade zinc-lead mineralisation in FC-3 occurs in the same stratigraphic and structural locations as encountered at McGregor and Shamrock.

“Volumetrically, FC-3 has the capacity to host significant zinc-lead mineralisation. This is our focus - adding to our already significant resource inventory. To this end, there are two diamond drill rigs on site, both testing for further extensions of the high-grade mineralisation in FC-3.”

FC-3 currently ranks as the highest priority fault compartment within the Allenwood Graben. Until now, there has only been a single rig in operation in FC-3, but with the success of the last two holes, the company is accelerating its drill testing of FC-3. Presently, two diamond drill rigs are operating in FC-3 and targeting extensions of the mineralisation seen in HZDD004 and HZDD005.

The overarching focus of the FC-3 drilling is to determine the lateral extent, and continuity, of the FC-3 mineralisation, such that it can be incorporated into any future resource upgrade.