The group’s landholding now stands at 475 square kilometres. As well as giving WRM a dominant landholding, this also offers first mover status in an underexplored area which has already delivered positive exploration results.

WRM's decision to significantly expand its tenement position has been prompted by outstanding exploration success at the Red Mountain Project, with the new claims being in relatively close proximity to proven high-grade mineralisation.

Commenting on the importance of this development and the support offered by Sandfire CEO Matt Gill, said: “Our successful first year of exploration on the ground at Red Mountain and the subsequent attraction of our strategic partner Sandfire has allowed White Rock to enact a much broader exploration and discovery vision by securing what we believe to be a regionally extensive and highly prospective land package.”

Building on areas of proven mineralisation

On this note, Gill said: “Field work has confirmed the regional prospectivity through our discovery this year of outcropping massive sulphide mineralisation at the Hunter prospect.

Further validation of the region’s prospectivity is evidenced by the extensive alteration and multiple VMS time horizons identified through field reconnaissance of targets developed from earlier desktop studies.”

With some drill hole results returning in excess of 17% zinc, 6% lead, 1000 g/t silver, 6 g/t gold and 1.5% copper, the 2018 field season also saw three reconnaissance crews out in the field mapping and sampling.

The culmination of this work has encouraged WRN to expand its strategic tenement holding to take in more of what has been identified as a highly prospective geological setting.

White Rock moved to secure the additional prospective areas in consultation with Sandfire.

Earlier in the year, encouraged by what WRM was doing, Sandfire also signed an agreement providing equity funding to assist the company to explore at Red Mountain, with an option to enter into an earn-in JV by the end of the year.

The majority of the expanded tenement area forms a contiguous block of mining claims that now extend the Red Mountain project over a larger area of the Bonnifield Mining district, to the west along strike and south into the prospective footwall stratigraphy identified as containing multiple VMS prospective time horizons.

As indicated below, the new claim areas will allow White Rock to systematically explore what is now held to be a highly prospective regional stratigraphic setting capable of hosting multiple high grade zinc-rich polymetallic VMS deposits. 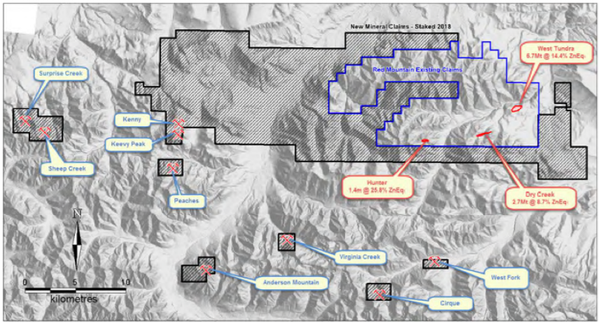 These prospects have been the subject of past exploration with VMS characteristics identified from mapping, rock chip sampling and in some cases drilling.

There are numerous opportunities to increase this resource — in discussing the upcoming exploration strategy, Gill said: “White Rock envisages that an aggressive systematic multi-pronged exploration program will rapidly yield the discoveries required to advance the Bonnifield district towards a new VMS development project.”