White Rock Minerals Limited (ASX:WRM) has provided an update on its plans to conduct a comprehensive exploration program at its 100% owned zinc VMS project at Red Mountain in Alaska.

Personnel crews have begun arriving at the summer field camp, to establish the camp area in preparation for field operations expected to commence within two weeks. Additional crews including the drillers and the field geological crew will also arrive for the drilling, geological reconnaissance and geochemical sampling programs.

It is expected that the geophysics crew (Zonge International) will commence their on-ground work in mid-June.

WRM’s exploration for the upcoming field season is planned to include:

The drilling campaign aims to infill and extend the maiden resource which already has two identified deposits at Dry Creek and West Tundra Flats. The resource base of 16.7Mt at 8.9% ZnEq1 includes a high-grade component of 9.1Mt @ 12.9% ZnEq1.

This drilling follows previous drilling last completed in the 1990s, which included:

Managing Director & CEO of White Rock, Matt Gill commented on the update: “A lot of preparation has gone into the planning for the commencement of field activities as early as possible in the 2018 field season. It is great to see all the hard work coming together as field crews begin to mobilise with first drilling expected to be underway within two weeks. There is a real sense of anticipation that the on-ground geochemistry and geophysics teams, combined with drill testing could yield additional high grade zinc deposits that catapult the project to the next stage and realise White Rock’s aspiration to develop a new mine. This is an exciting time for White Rock.” 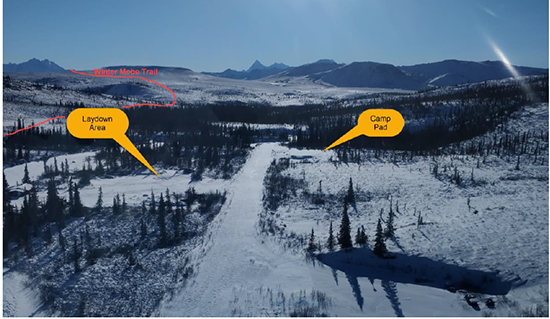 The Newman Creek airstrip and camp location, with the Red Mountain project to the west.