Drilling at Red Mountain kicked off in May. This project contains polymetallic VMS mineralisation rich in zinc, silver and lead, as well as potential for significant gold and copper. Mineralisation occurs from surface and is open along strike and down-dip.

At West Tundra, on the other hand, the second drill hole (WT18-28) intersected a zone of massive to semi-massive sulphide with visible sphalerite and galena from 60.6 to 63.1 metres (2.5m) downhole (estimated true width of 2.5m). This hole is around 75 metres from the nearest drill hole (WTF82-05). The first drill hole (WT18-27) drilled down a steep angled fault and did not intersect any significant base metal sulphide mineralisation.

Mineralised intervals have been split, sampled and submitted to ALS laboratories for analysis of gold and base metals. WRM said it expects results back in late June.

WRM MD and CEO, Matt Gill, said: “The commencement of the company’s first exploration programme at our globally significant high-grade Zinc VMS Project at Red Mountain in Alaska is a significant milestone for us.”

“We look forward to advancing our knowledge of this VMS field, and the news flow that should come from a successful exploration program here.”

A bit more on Red Mountain

The project has seen good preliminary metallurgical recoveries of more than 90 per cent zinc, 75 per cent lead, 80 per cent gold, 70 per cent silver and 70 per cent copper.

Interpretation of the geologic setting indicates conditions that enhance the prospectivity for gold-rich mineralisation within the VMS system at Red Mountain. Gold mineralisation is usually found at the top of VMS base metal deposits or adjacent in the overlying sediments. Gold bearing host rocks are commonly not enriched in base metals and consequently often missed during early exploration sampling. This provides WRM with an excellent opportunity for potential further discoveries.

WRM sees significant discovery potential here, especially given the lack of modern-day exploration. This is further enhanced by the nature of VMS clustering in camps and the potentially large areas over which these can occur. 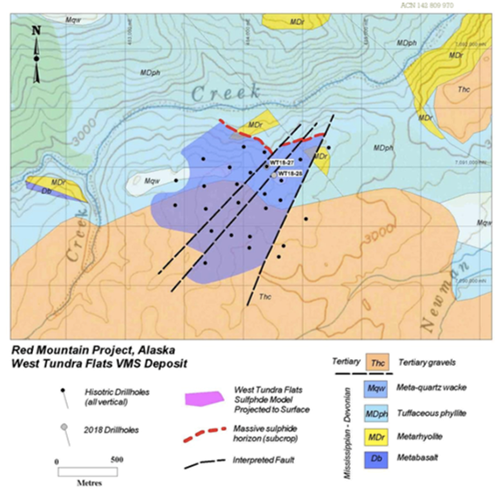