These anomalies were identified using both the CSAMT geophysics exploration tool and time domain electromagnetics geophysics.

The Red Mountain Project contains polymetallic VMS mineralisation rich in zinc, silver and lead, with potential for significant gold and copper. Mineralisation occurs from surface and is open along strike and down-dip.

The project has an Inferred JORC 2012 Mineral Resource estimate for the Dry Creek and West Tundra Flats deposit that contains an impressive base metal and precious metal content with 678,000t zinc, 286,000t lead, 53.5 million ounces silver and 352,000 ounces gold.

Drilling to test for down dip extensions at the Dry Creek zinc VMS deposit intersects massive sulphide mineralisation at the Discovery lens.

At Dry Creek, the first drill hole (DC18-79) at the Discovery zone targeted the down-dip extension of the Resource. Drilling intersected massive sulphide mineralisation with abundant sphalerite (zinc), pyrite and galena (lead) from 230.6 to 236.7 metres downhole. This hole is some 60 metres from the nearest hole (DC97-26).

The image below is of the Dry Creek prospect showing surface projection of massive sulphide mineralisation lens’ and the location of DC18-79 with respect to all historic drill hole traces and the orientation CSAMT line on the DGGS geology map. 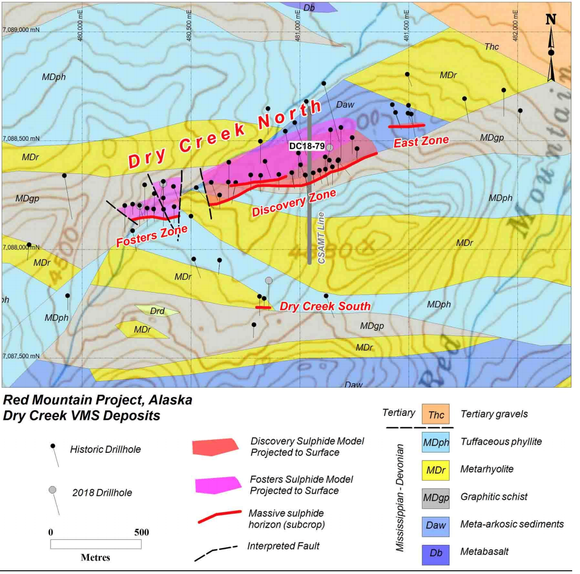 Here you can see the coincidence of the CSAMT conductivity anomaly with massive sulphide mineralisation intersected in historic drill holes at the Discovery lens: 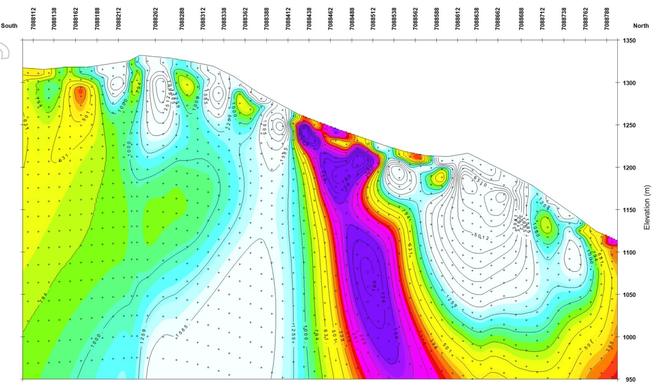 Drill hole DC18-79 intersected the massive sulphide zone of abundant sphalerite and galena in the core of the CSAMT anomaly. The coincidence of conductivity and massive sulphide mineralisation rich in sphalerite provides confidence in applying the CSAMT technique to define other targets for drill testing in new prospective areas prioritised by favourable geological observations and anomalous surface geochemistry.

White Rock MD and CEO Matt Gill said, “We are delighted with the results of the orientation geophysics. The stark conductivity anomaly results seen and their coincidence with known massive sulphide mineralisation gives White Rock a powerful exploration tool with which to identify new targets for drill testing, hopefully leading to resource expansion and the discovery of new deposits.

“Further, this latest drill hole intercept of massive sulphides supports our belief that there is further potential for the discovery of more high-grade VMS mineralisation and that this resource is also open down-dip.”