Results for DC19-96, the final drill hole of the 2019 season at Dry Creek were highly promising, particularly in terms of the high-grade mineralisation delineated.

The drill hole tested an aggressive 200 metre plus down-dip step out from the known high-grade zinc – silver – lead – gold mineralisation of both the Fosters and Discovery lenses at the Dry Creek deposit.

Drill hole DC19-96 targeted down-dip from historic drill holes DC19-66 and DC19-52 that contained significant mineralisation intersected in both the Fosters and Discovery lenses, as shown below. 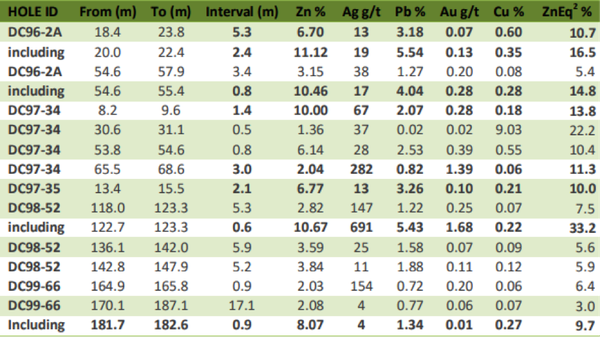 The drill hole also intersected a chert horizon correlating with the hanging wall position to the lower Discovery lens of massive sulphide mineralisation before being terminated due to poor ground conditions and the end of the field season corresponding with the onset of winter, leaving the Discovery lens potentially ahead of the drill hole path and untested.

‘’While this particular intersection is narrow, we know that typical VMS lenses pinch and swell along strike and down dip, as evidenced by previous drilling where true width intersections of up to 40 metres at the Fosters lens have been recorded.’’

This is demonstrated in the following graphic. 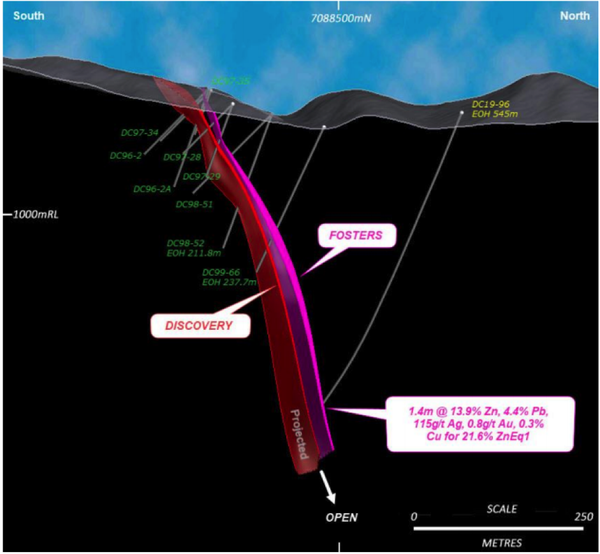 Pointing to what lies ahead, Gill said, ‘’The majority of the current Inferred Resource is drilled to a depth of just 200 metres so a further step out of over 200 metres suggests considerable upside is possible in expanding the size of the deposit.

‘’Furthermore, ground conditions and the onset of winter terminated the drill hole prematurely with the high-grade Discovery lens remaining untested at this depth.

‘’This leaves considerable additional potential to this down dip position in the deposit, especially when considering the resource footprint extends for 1,200 metres of strike.

‘’A targeted drill program early in the 2020 field season could unlock just how significant the resource expansion potential could be.”