White Rock Minerals (ASX:WRM) has made an extremely promising start to the 2020 year with the announcement of the discovery of two significant surface geochemical anomalies at its 100% owned Red Mountain Project, a high-grade zinc and precious metals VMS project in central Alaska.

Providing a further boost to the company’s prospects in 2020, management has secured some 84 square kilometres of new claims at Red Mountain.

This area is identified as being highly prospective territory based on a strong, robust, large (15 square kilometres) gold anomaly that was discovered during the 2019 stream sediment sampling program.

Harking back to the two new discoveries, during the 2019 field season White Rock completed a detailed regional stream sediment program over prospective stratigraphy within the Red Mountain project area. 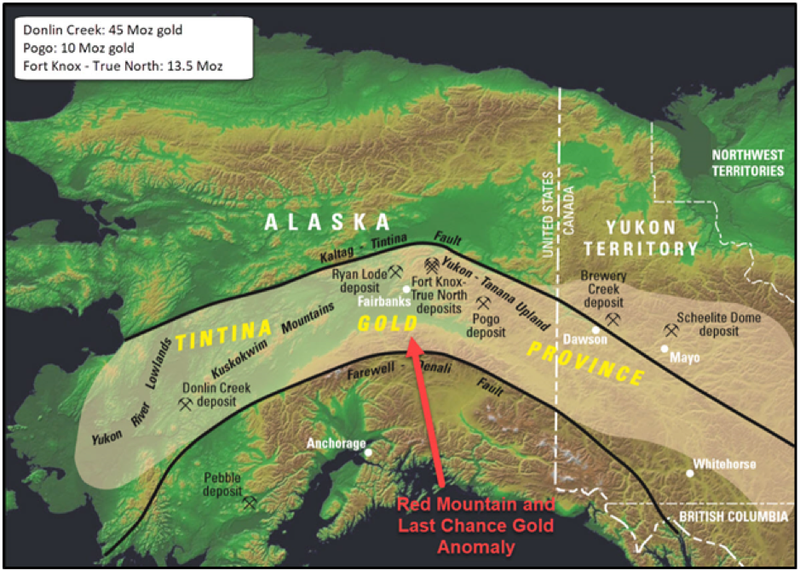 Within this system lies the Last Chance Prospect (red arrow) which is the aforementioned 15 square kilometre gold anomaly referred to.

The gold anomaly is located in the headwaters of Last Chance Creek.

Downstream from this prospect, significant placer workings commence 12 kilometres to the north and extend further north downstream through the foothills of the Alaska Range as shown below.

The Last Chance gold anomaly is located along a regional gold-arsenic-antimony trend that extends to the east and is spatially associated with a suite of exposed Cretaceous granites, the same age as those associated with the major gold deposits distributed throughout the Tintina Gold Province.

A historic search of the Alaska Department of Natural Resources website indicates that the Last Chance gold anomaly has never had any historic mining claims staked, suggesting that the area is unexplored.

Together with the size and strength of the gold anomaly, White Rock is buoyed by the exploration potential for the Last Chance Prospect to yield a significant new gold discovery.

On this note, managing director Matt Gill said, “White Rock is extremely excited about identifying such a strong and coherent gold anomaly in a part of the world class Tintina Gold Province.

‘’This region is host to over 100 million ounces of gold, that doesn’t appear to have been explored for gold by previous explorers despite the significant placer gold workings downstream only 12 kilometres from the Last Chance gold target.

‘’The detailed sampling gives White Rock an area for immediate focus with the hope that the gold anomalism could lead to a discovery with similar characteristics to world class deposits such as Donlin Creek and Pogo that are also located in the Tintina Gold Province.”

White Rock expects to be able to commence geological reconnaissance and detailed surface soil and rock chip geochemistry during June 2020, prior to the possibility of drill testing targets during the September quarter of 2020.

It is also worth noting the Moose Prospect which as indicated on the above map lies to the north of Last Chance.

It is a 1.5km2 zinc-copper anomaly defined by four stream sediment sample points of more than 5000 ppm (0.5%) zinc and more than 750 ppm copper, with two of these assaying greater than 1% zinc.

The anomaly is located in the lower section of the Totatlanika Schist on the southern limb of the regional synform.

This is along strike and to the west of White Rock’s high-grade zinc and precious metals Dry Creek VMS deposit.

The Moose zinc-copper target will also be prioritised for initial ground activities at the start of the 2020 field season.

Starting on front foot after strong finish to 2019

Assay results for the final drill hole (DC19-96) of the 2019 season at Dry Creek which tested an aggressive 200 metre plus down-dip step out from the known high-grade zinc-silver-lead-gold mineralisation of both the Fosters and Discovery lenses returned extremely high grades.

This deepest intersection in the Dry Creek deposit indicates a possible steeper dip to mineralisation than first interpreted, suggesting the deposit could be wide open down dip along its entire 1,200 metre strike length. 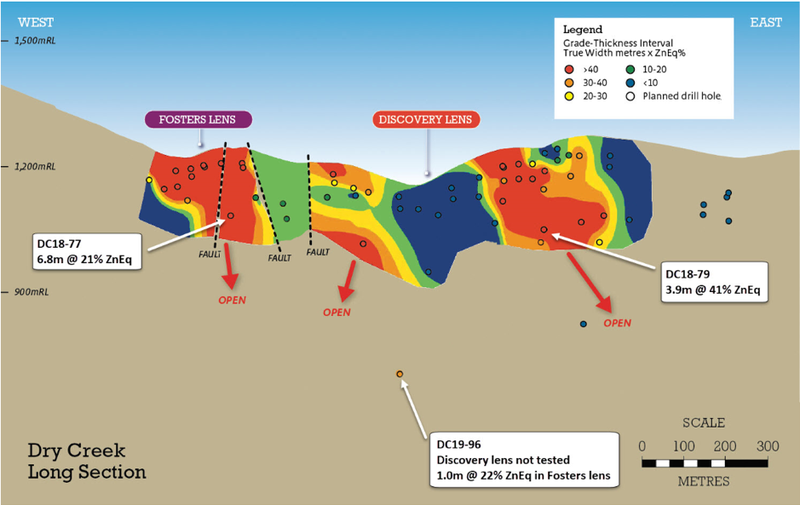 This leaves considerable additional potential to the down dip position in the deposit, especially when considering the Resource footprint extends for 1,200 metres of strike.

A targeted drill program early in the 2020 field season could unlock just how significant the Resource expansion potential could be.

With this in mind it is extremely valuable for White Rock to have Sandfire Resources (ASX:SFR) as a strategic partner and major shareholder that has signed an earn-in joint venture that could see $30 million spent on the Red Mountain Project for a 70% interest in this high-grade asset.

This is how Sandfire’s contributions will assist White Rock in the near to medium-term as it contributes towards financing of exploration and studies, as well as a possible proportion of development costs depending on decisions taken by the parties following the DFS.