Final data from the 500 square kilometre airborne electromagnetic (AEM) geophysical survey, which was flown in April and May this year, has now been received and is being integrated with surface geochemistry to prioritise a number of identified VMS targets for drill testing.

The survey below shows conductivity features associated with volcanogenic massive sulphide (VMS) mineralisation at the Dry Creek and WTF deposits.

More specifically, results from the AEM survey showed a signature conductivity response at both of the two known high-grade massive sulphide deposits at Dry Creek and WTF.

The graphitic unit at the base of the Sheep Creek Member is a distinctive marker horizon along the northern limb of the targeted syncline representing an equivalent horizon to that hosting the high-grade WTF massive sulphide mineralisation, where the Inferred Mineral Resource for WTF stands at 6.7 million tonnes at 6.2% zinc, 2.8% lead, 189 g/t silver and 1.1 g/t gold for a grade of 14.4% zinc equivalent.

Prospecting of the northern limb along the Glacier Trend, a spatially extensive alteration zone with 10 kilometres of strike length, has identified sulphide accumulations, chert and iron formations, all believed to be proximal to horizons prospective for base metal rich massive sulphides along strike and down dip.

Additional rock chip data collected is being assessed in conjunction with conductivity responses from the AEM data to assist in drill targeting.

The drill rig has now moved to test the first of these new targets at the Arete prospect which is featured on the following map. 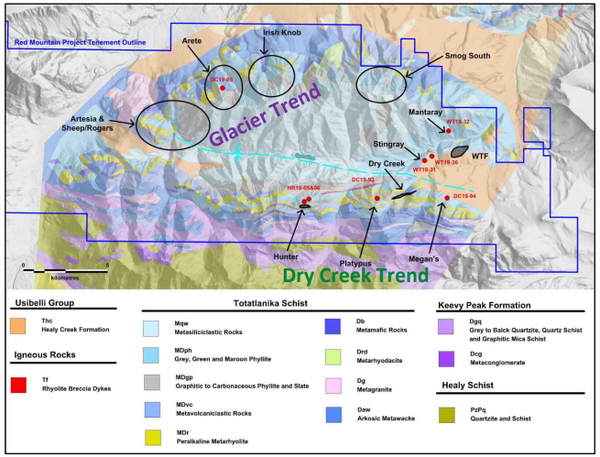 The target at Arete is the down dip projection of a massive sulphide outcrop that exhibits a distinct conductivity response in the AEM that has similarities in geometry and strength to those at the Dry Creek and WTF deposits.

Consequently, the much anticipated drilling results could be the forerunner to unveiling a materially significant deposit.