You only have to look at some major discoveries and exploration success by Australian juniors in the gold sector to appreciate how penny-dreadfuls can become the next big thing overnight.

In the last six months, shares in Spectrum Metals (ASX:SPX) increased more than ten-fold from less than 1 cent to a recent high of 12.5 cents on the back of its Penny West discovery in Western Australia.

Prior to this exploration success the historic reconciled production figures of the high-grade ore from the Penny West open pit were 121,000 tonnes at 21.8 g/t for 85,000 ounces, to a depth of just 82 metres or over 1,000 ounces per vertical metre.

Given the history, you could have said that this was a no-brainer, and those who threw some of their ‘hard earned’ at Spectrum before it started drilling are sitting on a 15 bagger.

Stepping outside of Australia, there are similar opportunities for those who see the potential for significant gains from moving early on projects where geological trends and historical mining activity tend to support the prospect of success.

Investors who adopt this strategy should examine Ardiden Limited (ASX:ADV), a company targeting a high-grade gold region in Ontario Canada.

Rubbing shoulders with the big guys

Ardiden’s high-grade Kasagiminnis Gold Deposit lies within its Pickle Lake Gold Project where there are a number of prospects including South Limb, West Pickle and Dorothy-Dobie.

The Pickle Lake Gold Camp has produced over 3 million ounces of gold since 1935 from four underground operations.

Newmont-Goldcorp is currently operating the Musselwhite gold mine, 125 kilometres north of Pickle Lake.

While the names are colourful, the area’s reputation for delivering large high-grade gold deposits precedes it. 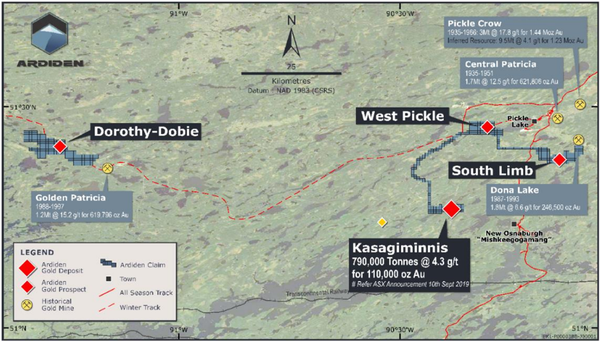 As the saying goes, grade is king, and Ardiden’s projects could be next in line to the throne.

Certainly, plenty of the majors believe in the area.

The Kasagiminnis Gold Deposit is only 35 kilometres from First Mining Gold Corps (TSX:FF) processing plant and underground mine, eight kilometres north-east of the Pickle Lake township.

Additionally, Tri-Origin Exploration (TSX-V:TOE) holds an option with the US$33 billion Barrick Gold Corp (NYSE:GOLD) over the gold deposit located 12 kilometres south-west and directly along strike of Kasagiminnis.

Ardiden’s South Limb prospect also abuts onto Metals Creek Resources’ (TSX-V:MEK) Dona Lake Gold Project, and it has an option agreement with Newmont-Goldcorp over the nearby historic Dona Lake underground gold mine.

With this significant amount of activity in the region, Ardiden is investigating potential synergies with all companies active within the Pickle Lake - Red Lake region.

Establishing a Maiden Mineral Resource Estimate for the Kasagiminnis Deposit represents the first building block of planned gold resource upgrades as drilling recommences and exploration activities ramp up on site.

To remain conservative at this stage of evaluation, the Mineral Resources have been reported only above a 3.0 g/t gold cut-off grade to reflect current commodity prices and likely extraction by underground mining methods.

There are numerous potential down dip and along strike extensions of the ore zones that remain untested.

Consequently, there is the potential for further market moving news as Ardiden progresses its exploration program.

Putting this recent development into perspective and providing some insights into the region and its ability to benefit from modern exploration, Ardiden’s chief executive Rob Longley said, “The Pickle Lake Greenstone area has been overlooked and under-loved since the 1980’s, but now there is renewed interest from numerous mining and exploration companies in both the dormant underground mines and adjacent extensions of mineralised areas.

‘’A higher gold price and much improved exploration techniques has made this Gold Camp ripe for re-evaluation.

‘’Kasagiminnis is only a small part of our Pickle Lake Gold Project and following a recent site visit, I am encouraged by the prospectivity of the district in terms of mineralisation, opportunity and stakeholder willingness to advance these projects.’’

Ardiden has commenced planning for additional drilling, including negotiations with First Nations groups and approvals aimed at extending the resource along strike and at depth at Kasagiminnis.

As indicated below, to the south-west of Dorothy Dobie lies another major gold bearing region, the 27 million ounce Red Lake Gold Camp. 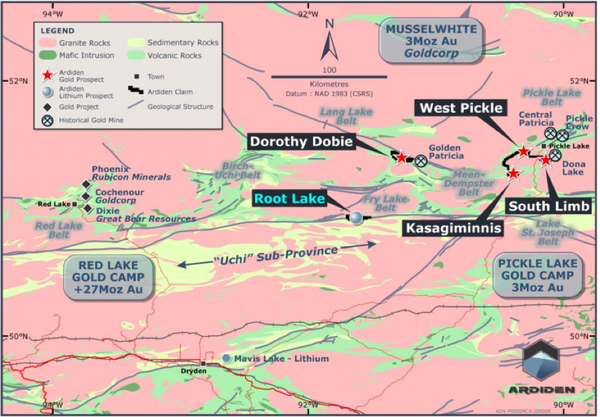