The MoU constitutes an initial collaboration period, during which Pfalzwerke geofuture will supply live brine and well data from its operational geothermal power plant for Vulcan to use in its prefeasibility study (PFS).

The significance of this development, which is in effect an endorsement of Vulcan’s progress in terms of moving to a zero carbon lithium producer, can be fully appreciated by examining the background and highly profitable operations of the Pfalzwerke Group, details of which we will discuss later.

A legal Joint Venture (JV) will then be established, under which Vulcan will earn up to 80% of the lithium rights at Insheim by completing a DFS for lithium extraction.

The Insheim plant is currently pumping lithium-rich brine to the surface for energy generation, but not processing and extracting the lithium, before the brine is reinjected into the reservoir.

As part of this DFS, Vulcan will construct and implement a demonstration plant at Insheim.

Following completion of the DFS, Pfalzwerke geofuture can then choose to co-contribute to the construction of a commercial-scale lithium plant on site, or dilute interest to a royalty on lithium production.

Highlighting the significance of this development in terms of accelerating Vulcan’s aim of bringing a zero carbon lithium hydroxide product to market, managing director Francis Wedin said, “Partnering with the Pfalzwerke group, a well-respected German utility, is a transformational step for the company.

‘’It brings our goal of producing a Zero Carbon LithiumTM hydroxide product in Germany much closer to becoming a reality.

‘’We now have access to a lithium-rich producing geothermal brine operation, so that feasibility studies and potentially first lithium production can be achieved in a much shorter timescale without the immediate need to drill our own geothermal wells.’’

It aims to achieve this by producing battery-quality lithium hydroxide from hot, sub-surface geothermal brines pumped from wells, with a renewable energy by-product fulfilling all processing energy needs.

The Vulcan Zero Carbon LithiumTM Project is strategically located, within a region well-serviced by local industrial activity, at the heart of the European auto and lithium-ion battery manufacturing industry, just 50 kilometres from Stuttgart, the capital of south-west Germany’s Baden-Württemberg state, and a renowned manufacturing hub.

Mercedes-Benz and Porsche have headquarters and museums in the city which in keeping with the government’s expectations of a low environmental footprint is filled with greenspaces. 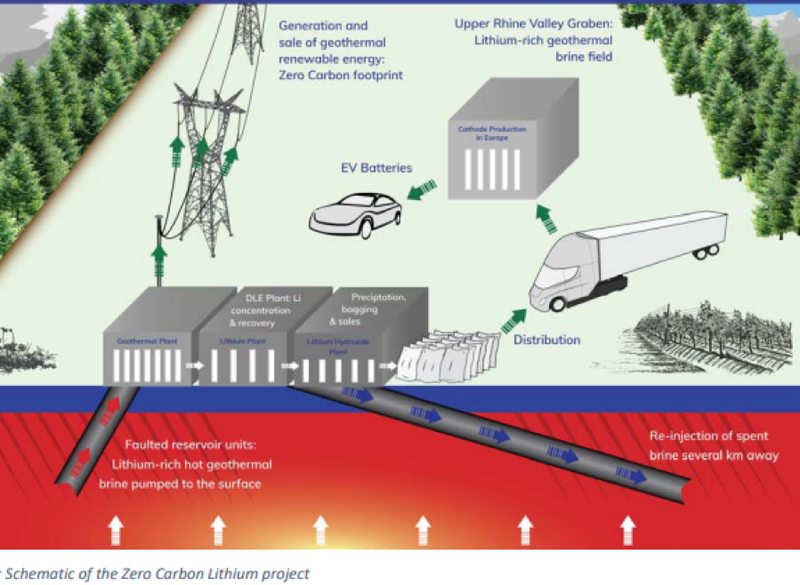 Mercedes-Benz and Porsche have headquarters and museums filled with greenspaces.

Vulcan is concluding a scoping study at the project and is targeting a maiden JORC resource by the end of December.

Pfalzwerke geofuture GmbH is the owner-operator of the Insheim geothermal plant, which has been operating successfully for seven years, providing Vulcan with predictability of supply.

The entity is 100%-owned by Pfalzwerke Gruppe which was founded in 1912.

The group has established itself as a German and international energy provider with annual revenue in excess of €1.5 billion.

Pfalzwerke Gruppe and its subsidiaries and partners offer solutions for all aspects of electricity and heating.

Importantly from Vulcan’s perspective, the company is increasing its share of renewable energy sources such as photovoltaic, biomass, geothermal and wind power.

With approximately 430,000 private and 20,000 business customers, as well as power supplies to 60 municipalities, Pfalzwerke Gruppe is one of the most important energy supply companies in Germany.

This is important for Vulcan as it should provide a ready end-market for the group’s product.

Both parties to potentially benefit from production at Insheim

The Insheim plant operates with a thermal water temperature of 1650C, producing a maximum of 4.8 MWel power and 10 MW thermal energy.

The plant receives a feed-in-tariff of €0.25/kWh under the EEG (German Renewable Energy Act).

Currently, brine is pumped up, energy produced and the brine re-injected with no extraction of lithium from the lithium-rich fluids.

The agreement with Vulcan allows both parties to potentially extract value from the lithium contained within the brine.

The plant has a very small footprint and operates in harmony with its local surroundings.

This is a testament to the potential of geothermal wells to service Europe’s battery-quality lithium needs, with zero carbon footprint, without the requirement for environmentally and socially undesirable hard-rock mining.

With such a pronounced emphasis on environmentally friendly initiatives, one would expect strong government support for Vulcan’s zero carbon lithium project.