Venus Metals Corporation Ltd (ASX:VMC) continues to intersect outstanding gold grades from stage II of its drilling campaign at the Currans Find North Prospect, part of the Youanmi Gold Project in which the company has various joint-venture interests.

Bonanza gold grades up to 72 g/t gold were revealed during initial drilling at Currans Find, and phase 2 reverse circulation (RC) drilling has been completed.

Some big hits featured in the drill results released on Monday morning included 3 metres at 25 g/t gold, including 1 metre at 57.1 g/t gold at a depth of approximately 110 metres.

At a similar depth, wider intersections of 8 metres also had outstanding grades of approximately 7.8 g/t gold. 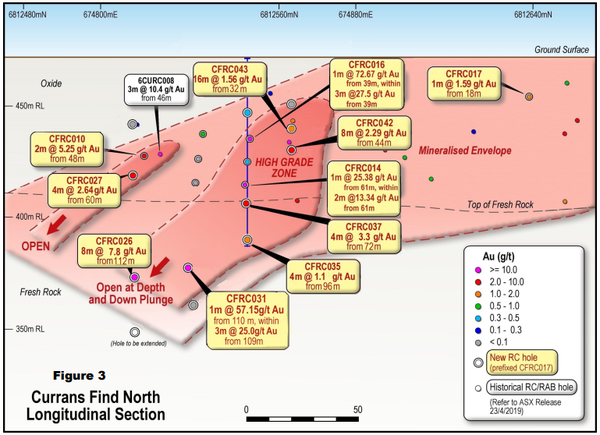 However, it isn’t just the high grades that have impressed management.

From a geological perspective, within the high‐grade gold intersections, accessory galena associated with significant sulphide contents has been identified in the RC rock chips.

Management said that this was an important new development which shows gold-sulphide association.

Underlining the significance of the presence of galena, management now intends to commence follow up RC drilling within the week.

The following map shows the area that will be targeted (yellow). 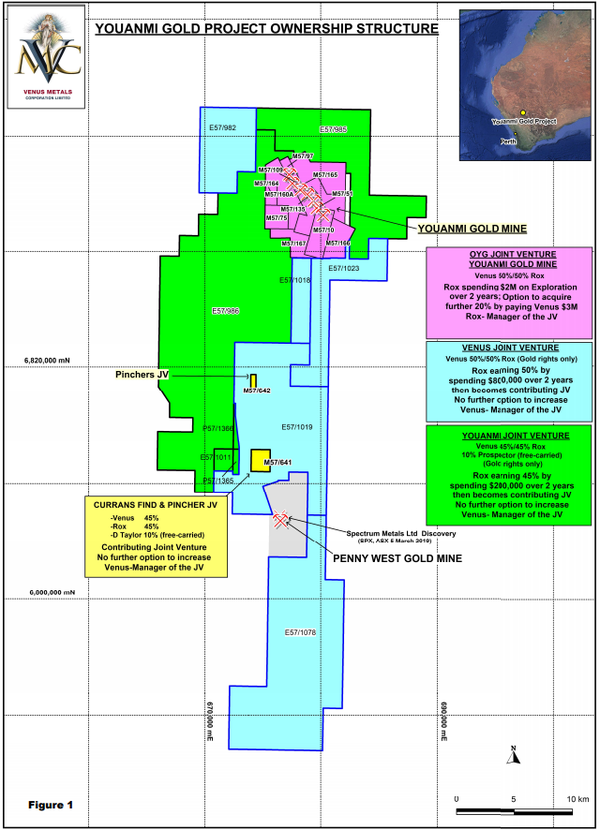 The map also shows the varying part interest of Venus Metals in relation to other tenements that form the Youanmi Gold Project, an area that has become hot property due to extensive exploration success in and around the broader area including tenements closely located to Currans Find.

Is Venus a Spectrum in the making

One of the most notable was the discovery made by Spectrum Metals which lies just to the south-east of M57/641 as shown on the above map in grey.

Interestingly, the higher grade intersections in these results weren’t all that much wider than those encountered by Venus Metals and the grades were similar.

The gold was encountered at depths of around 250 metres, suggesting that there may be upside at Penny’s Find as deeper drilling is undertaken.

Underlining Spectrum’s expectations of further high-grade mineralisation at depth is management’s decision to commence diamond drilling in the very near term.

Consequently, it isn’t surprising to see that Venus is adopting an exploration strategy in its stage III program that should assist it in identifying down-plunge mineralisation.

On this note, the company said: “Based on the outcomes of the recent RC drilling programs, the company has planned an IP geophysical survey at M57/641 (Currans Find).

“Its purpose is to detect sulphide bodies that may host gold mineralisation as observed in the recent drilling.

“Such potential gold lodes may have remained undetected by shallow historical drilling and surface sampling.

“The outcomes of this IP survey will assist in more effectively targeting the Stage 3 drilling.