Venus rallies on back of Youanmi drilling results

High-grade gold mineralisation discovered during a Stage 2 Air Core drilling (AC) that followed up on anomalous gold identified during the initial AC drilling yielded high-grade results including 4 metres at 7 g/t gold from 24 metres and 5 metres at 2.4 g/t gold from 60 metres to end of hole.

Shares in Venus were up more than 5% in the first hour of trading after the results were released.

The mineralisation which is open at depth and along strike is located along a north north-west trend close to the Youanmi Shear Zone, approximately five kilometres north of the historical Penny West Gold Mine.

Further air core drilling along with reverse circulation drilling will be conducted immediately in order to confirm the extensions of the high-grade mineralisation at depth and along strike.

As shown below, this is a highly prospective area where there has been historical production, as well as a recent discovery (March 2019) by Spectrum Metals. 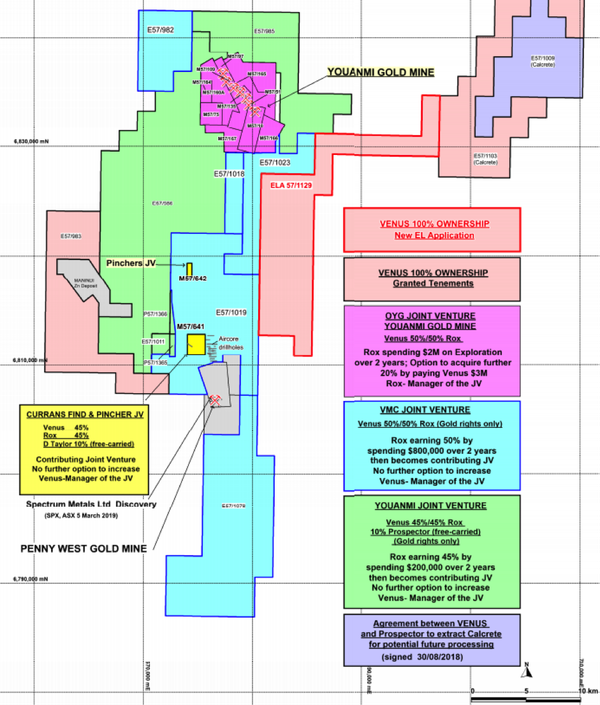 The Stage 2 AC drilling program totalling 3,131 metres in 61 holes explored the strike extensions of the recently discovered gold - base metals anomalies, and with the discovery of significant new gold mineralisation in holes VRAC151 and VRAC161, and immediate follow-up drilling is planned.

The strong gold mineralization in VRAC151 which included 4 metres at 7 g/t gold occurs in two separate intervals with the upper one hosted in the clay zone and the lower zone being associated with sheared mafic rock and vein quartz.

The AC hole was drilled to a point where the rock was too hard for the AC method, and this hole ended in gold mineralization of 2 metres at 3.1 g/t gold.

The high-grade gold intersections in hole VRAS151 represents the best gold zones encountered to date along the Youanmi Shear Zone south of the Youanmi Gold Mining area and north of the Penny West and Columbia-Magenta prospects.

To put this in perspective, the recent Penny North discovery by Spectrum followed up on an isolated intersection of 1 metre at 6.5 g/t gold from 92 metres depth and the Penny West gold mine discovery started with results of up to 1.5 g/t gold.

Venus managing director Matt Hogan suggested this could be a discovery in the making in saying, “These significant air core drilling results, particularly in hole VRAC151, highlight the potential of the Youanmi Shear Zone to host significant gold mineralization that does not show at surface.

‘’Our drilling may have identified a new corridor of gold mineralization interpreted to be associated with a north-northwest trending splay from the main shear and immediate follow-up reverse circulation drilling is planned “.