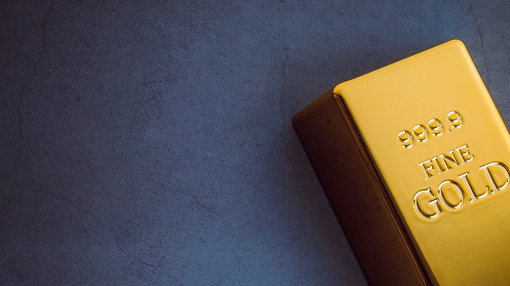 Impressive drilling results released today by Venus Metals Corporation Ltd (ASX:VMC) could see the company’s shares start to recover some of the ground lost in recent weeks as they retraced after surging in July/August.

In recent months they have run on the back of promising exploration results, and today’s news builds on similar data that triggered a doubling in share price between mid-June and early August.

Bonanza-grade gold intersections had previously been reported from Stage 1 and 2 reverse circulation drilling at the Currans Find North Prospect between June and August.

It was arguably just a combination of volatile equity markets and profit-taking that saw a retracement in the company’s share price, and it wouldn’t be surprising to see a recovery.

Today’s Stage 3 results confirm the presence of two stacked lodes at Currans North and show an increase in gold grade and width in the Upper Lode as indicated below in drill holes CFRC47 and CFRC46 (see western margin). 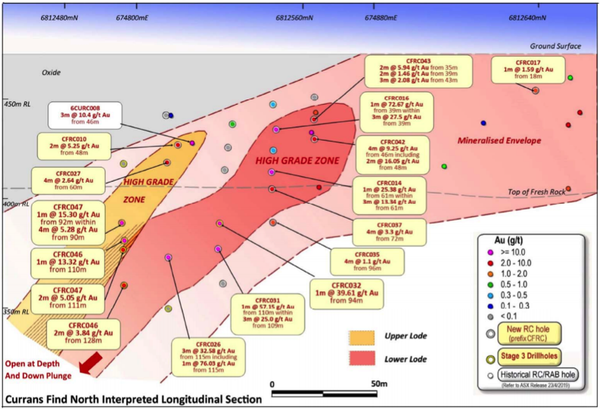 Results build on prior Bonanza grade the sections

The results also demonstrate that the gold mineralization remains open at depth and down plunge.

Multi-element analyses of high-grade gold intersections from this and previous drilling by the company have been completed.

This work has identified a distinct geochemical signature that will be used to target similar lodes elsewhere within the Currans Joint Venture mining lease and the adjoining Venus Joint Venture exploration licences.

These results build on stunning bonanza grade gold intersections identified in stage I and II drilling as outlined below. 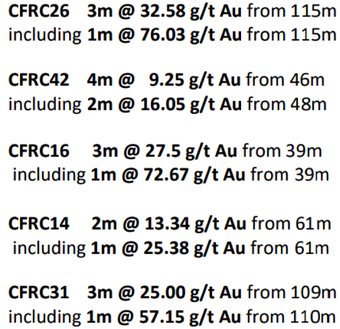 Stage 4 drilling to test down plunge

These rock types are also host to the Penny West and Columbia–Magenta deposits south of Currans Find.

Stage 4 reverse circulation drilling is planned to test the down-plunge extension of the stacked high-grade gold lodes at the Currans North Prospect, and explore down-plunge and along-strike at the Red, White and Blue Workings.

Stage 4 RC drilling will also test other new targets based on historical drill data within the mining lease, as well as any potential targets generated by the IP geophysical survey.