The other two EM conductor targets represent a potential deep, down dip conductor to Vidure (VDEM3) and a strong anomaly located to the north-east (VDEM4).

The Vidure prospect is part of the company's Youanmi Base Metals Project and is within the Youanmi tenement holdings, an area that includes a variety of mineralisation styles and commodities including gold, silver, copper-zinc, titanium and vanadium and nickel-copper-PGEs.

The Vidure prospect was identified as a nickel-copper-platinum group elements geochemical anomaly located on the southern margin of the Youanmi layered mafic intrusion.

Base metal mineralisation was first identified by Western Mining Corporation in 1973, and subsequent to that BHP also made highly promising discoveries in the area.

Venus Metals’ strategy is to follow up on historical EM surveys which were conducted with low-powered systems resulting in poorly constrained deeper targets that appear to represent potential down-dip and down-plunge extensions of the known mineralisation highlighted earlier.

The following image shows the high conductivity areas outlined by the company. 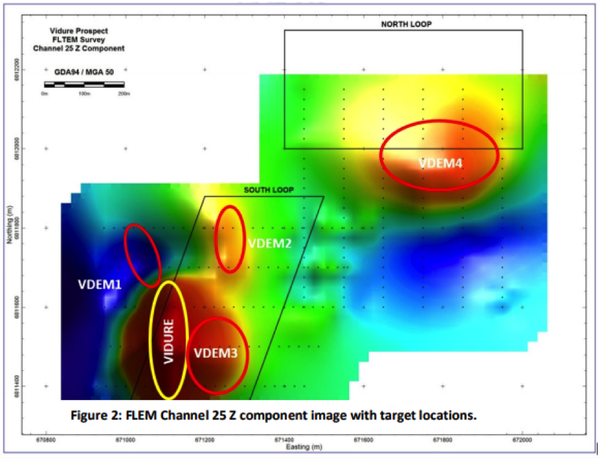 Discussing the significance of the survey results and commenting on upcoming work, Venus’ managing director Matt Hogan said, “The recent EM survey has been highly successful and we are extremely excited about the presence of the deep conductor plates that are prime targets for potential base metals mineralisation and have never been tested.

‘’Drilling these conductors is a top priority and a program will commence as soon as possible.”

A strong Australian dollar gold price along with some impressive exploration results from Venus Metals’ Currans Find North prospect resulted in the company’s shares more than doubling between June and August.

A recent retracement can mainly be attributed to volatility in broader equity markets, and with Currans Find North still an immature project with the prospect of substantial upside, the company appears to represent good value at current levels, particularly given there are now multiple share price catalysts on the horizon.