Vango Mining Limited (ASX:VAN) has released a Global Mineral Resource at the Marymia Gold Project that has been significantly upgraded, now standing at 1 million ounces at a grade of 3 g/t gold.

Importantly, there is now added certainty given that the Indicated Resource category makes up 66% of the overall Mineral Resource.

As illustrated below, the Marymia Gold Project is in the hub of gold territory, 300 kilometres north-east of Meekatharra in the Mid-West region of Western Australia. 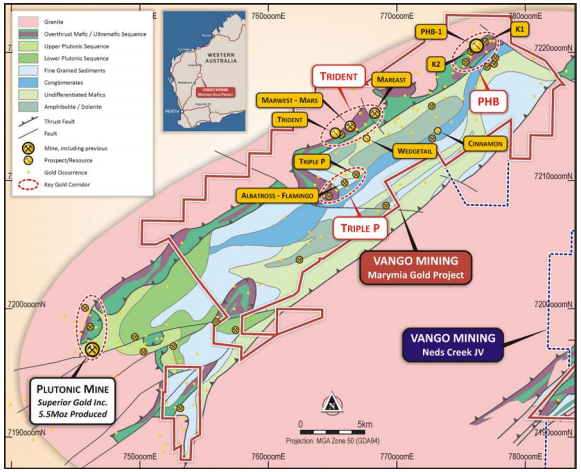 Underlining the project’s high profile as an emerging development, Vango chairman, Bruce McInnes, said, ‘’The significant size of the resource, the high proportion in the Indicated Resource category and the relatively high-grade reaffirms the Marymia Gold Project as one of the most significant undeveloped gold projects in Australia.

Each of these is similar in scale to the nearby Plutonic gold deposit, but still only tested to shallow depths.

Management has gained a detailed understanding of the geology and mineralisation controls at Marymia since the commencement of its systematic drilling campaigns in 2017.

This has led to the development of a predictive exploration model to be applied to continued drilling programmes that are designed to further expand the Marymia high-grade resource base.