Vango is a rare find among gold juniors

Gold exploration and development company Vango Mining Limited (ASX:VAN) would have to be viewed as one of the most promising junior players in the gold sector when you consider it has an established high-grade resource and is close to multi-million ounce mines, as well as having tenure in the midst of proven gold trends in the heart of mid-west Western Australian gold territory.

The company has an established high-grade resource underpinned by a new flagship Trident resource of approximately 1.6 million tonnes at 8 g/t gold for 410,000 ounces.

Trident is open at depth and along strike with immediate upside potential to significantly grow the resource.

In what would represent further exploration upside, management is posing the question as to whether the Triple P area (Vulcan) is another Plutonic given that it is hosted by the Plutonic Mine Mafic, featuring shallow plunging higher grade gold shoots and bounded by steep mineralising fault structures.

Indeed, the wider Vulcan target has similar dimensions to Plutonic, making it a priority major discovery target for further drill testing in 2019/2020. 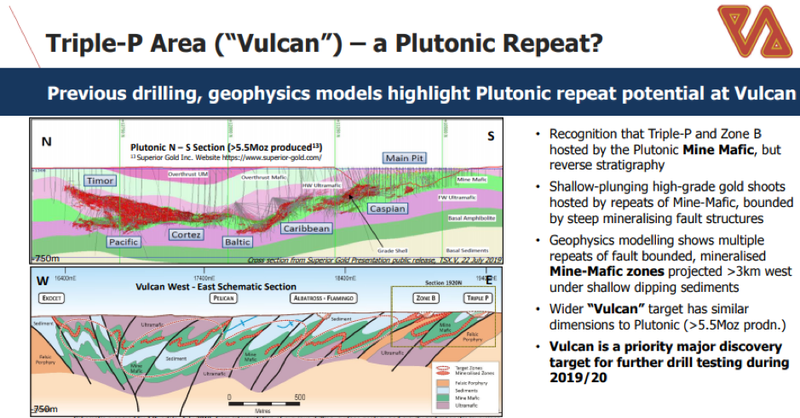 The wider Vulcan target has similar dimensions to Plutonic.

Multiple drilling success suggests this is the haystack, not the needle

Vango’s emergence as one of the hottest smaller cap gold stocks has not just resulted from a couple of lucky drill holes - the company has undertaken extensive drilling along various parts of the anticipated trend and they are all coming up trumps.

The company first came under the microscope in April when it delivered bonanza high-grade gold intersections at the Trident gold deposit.

The high‐grade gold intersections at Mareast are hosted by a thick mafic unit interpreted to be analogous to the Mine‐Mafic that hosts the major Plutonic gold deposit, 30 kilometres to the south-west which has produced more than 5.5 million ounces of gold to date.

This isn’t a project with unrealistic expectations.

Management believes that Mareast may represent the surface expression or “tip of the iceberg” of a plunging corridor of mineralised Mine‐Mafic, potentially extending for over five kilometres under the Trident‐Marwest‐ Mareast Corridor.

Importantly, this isn’t a project with unrealistic expectations, evidenced by a $70 million funding agreement recently struck with a Beijing based listed Chinese entity.

As a backdrop, just two days after announcing impressive drilling results at its Mars prospect, Vango entered into a Strategic Partnership Framework Agreement with China Nonferrous Metal Industry’s Foreign Engineering and Construction Co Ltd (NFC) which will assist in the financing and development of the Marymia Gold Project.

While the Mars results were outstanding as indicated in the following graphic, once again it is only part of a bigger picture that continues to yield strong results. 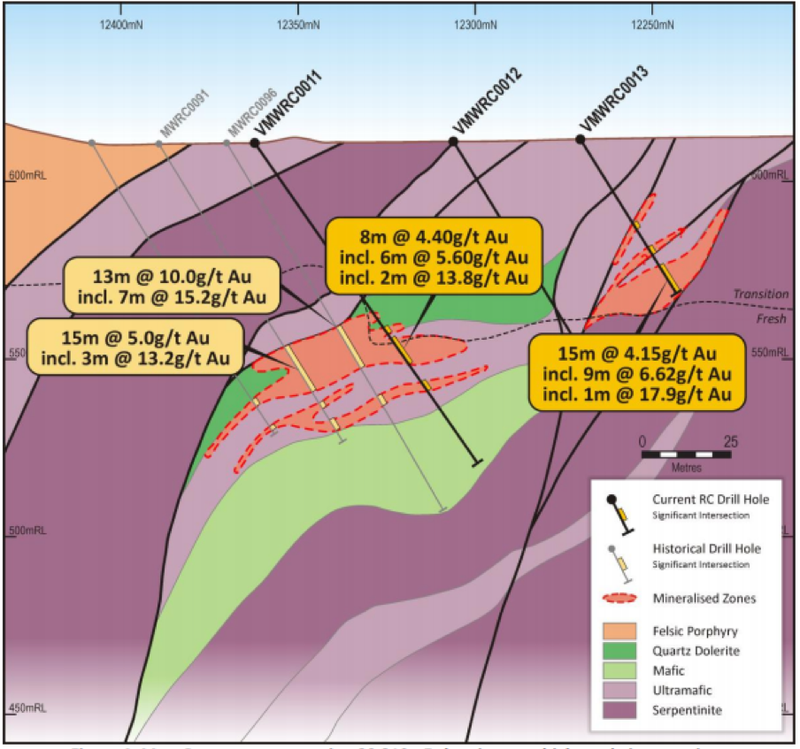 The Mars results were outstanding.

Back to NFC though, it is one of China’s leading construction and engineering groups and builds, owns and operates base metal mines, processing plants and smelters around the world.

The agreement is a significant milestone in the development pathway of the Marymia Project, and represents the formal starting point in Vango’s relationship with NFC for the financing and development of the project.

In effect, it is also an endorsement of the value that can be attributed to the project, suggesting that the group’s market capitalisation of approximately $100 million may be conservative.

Consequently, this development could provide share price momentum, at least returning the company to its 12 month high of about 22 cents.

On the share price front, the company traded strongly between March and September with its shares increasing from 12 cents to 22 cents, and it would appear that a slight retracement in the gold price could account for some profit-taking, whereby it now presents a buying opportunity.

At the peak of the precious metal’s strong run between May and September, the Australian dollar gold price was only briefly more than $100 per ounce better than where it is at the moment.

To put gold’s recent retracement into perspective, the average production costs in Australia are in the vicinity of $1300 per ounce (some below $1000 per ounce), implying a healthy margin of $850 per ounce at current levels.

With NFC’s support arguably game changing both in the near term and in so far as the group’s ability to fully develop the Marymia Project it wouldn’t be surprising to see Vango rebound.

Exploration the key to establishing scale

In terms of taking Marymia to another level, management needs to focus on establishing a sizeable resource.

One of Vango’s key benefits is that companies often invest significant dollars into exploration and establishing a resource, only to find that gaining project funding is a stumbling block.

Already having the support of NFC is a definite positive that will become increasingly relevant as Vango builds investor confidence around the ability to transition from explorer to producer. 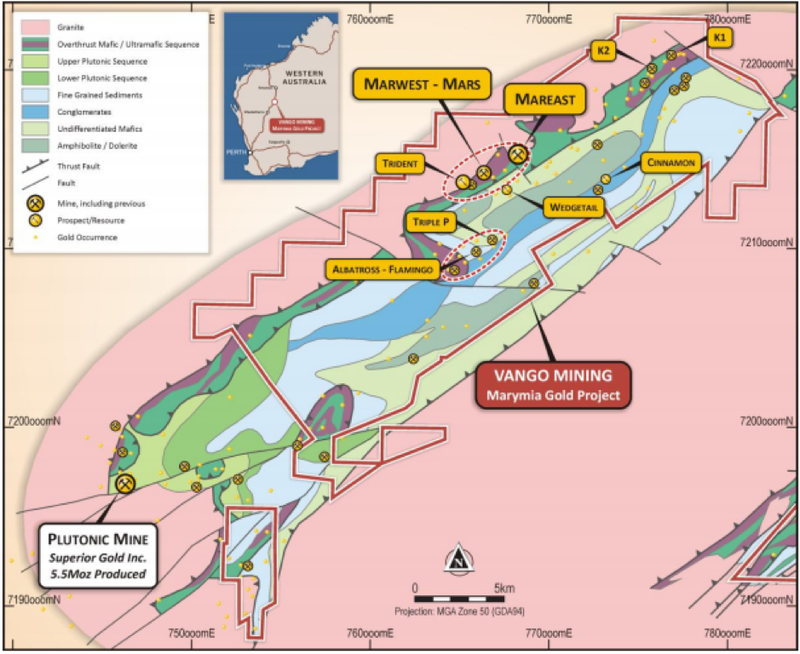 The very high‐grade Trident gold resource is open beyond the one kilometre strike length.

Vango is undertaking a focused drilling campaign within the Trident‐Marwest‐Mareast Gold Corridor, with the aim of delivering a significant upgrade to the existing high‐grade resource.

The shallow high-grade gold intersections at Mars that were reported on November 19 represented an important step in terms of achieving that goal.

As indicated above, the Mars deposit is located at the north-eastern end of the two kilometre Trident-Marwest zone which sits within the five kilometre structural/mineralisation gold corridor that continues from the very high-grade Trident resource through the Marwest/Mars prospects to the Mareast prospect.

The latest thick and high-grade intersections, reported in November are from shallow depth and further highlight the resource expansion potential of the Trident-Marwest-Mareast Gold Corridor.

The new gold intersections at Mars remain open to the south-west where the zone may link with the Marwest deposit and/or extend below Marwest to connect with the Trident resource, two kilometres to the south-west.

Vango plans to confirm new open-pit resource estimates for Mars and Mareast, and it will make assessments regarding further drilling requirements in order to delineate these resources.

The new resources will be added to the Marymia Project’s existing resource inventory (eg. the high-grade Trident Mineral Resource) along with other new, high-grade, underground resource estimates planned to be defined via the company’s targeted ongoing drilling programmes.

This drilling will target Triple P - Zone B, Albatross-Flamingo and other areas, with the aim of delivering a significant upgrade to the resource base for the proposed stand-alone Marymia Gold Project.

These other areas can be seen on the above map lying only a short distance to the south of the Trident-Marwest-Mareast Gold Corridor.