PHB-1 is situated to the north-east of the K2 open-pit, and these results build on previous outstanding returns of more than 100 g/t gold.

The new intersections featuring grades in the vicinity of 20 g/t gold are from reverse circulation (RC) drilling that has been targeting a shallow northerly plunging extension of the Main and Central Lodes, areas that were mined previously in the historical open-pit.

RC drillholes VK2RC0009 and VK2RC0010a as outlined below produced high-grade intersections from targeted extensions of the Main Lode structure based on the new shallow plunge interpretation of the gold mineralised zones. 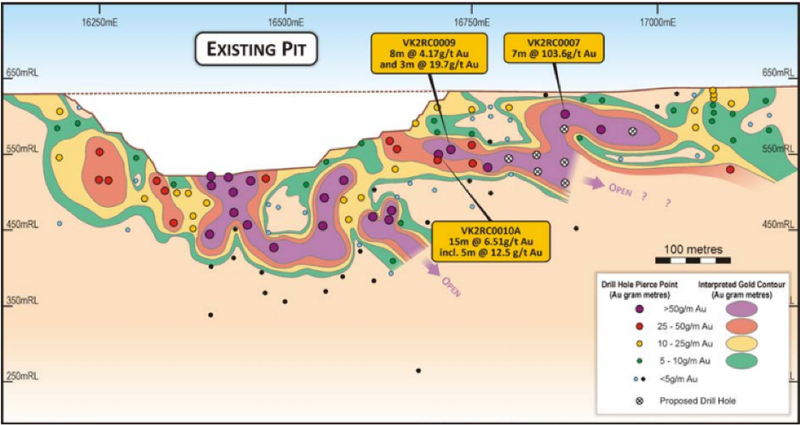 These intersections at the PHB-1 prospect, come from an area where very few drill holes have tested projected extensions of the Main Lode, Central Lode and Eastern Lode structures, including below and along strike from the 7 metres at 103.6 g/t gold intersection from drillhole VK2RC00071 (see above).

The new interpretation of shallow plunging, and untested, extensions to the Main Lode and other lode structures in the PHB-1 area, opens up a strike potential of over 500 metres on these structures, where both open pit and underground targets have been identified.

Management is planning further drilling to extend and define these new projected high grade gold lode extensions, a much anticipated event that has the potential to provide share price momentum despite challenging market conditions.

In the interim, the third round of drilling results from this area are expected shortly, along with proposals for new drilling to define new open pit and underground resources in this area.

The latest intersections will be incorporated into new interpretations of key lode structures, prior to incorporation into the planned Marymia Gold Project resource upgrade, arguably one of the most significant developments that will occur in 2020.