Owner of the 410,000 ounce Trident resource in Western Australia, along with some highly prospective exploration territory, Vango Mining Ltd (ASX:VAN) has taken an 8.8% interest in Lodestar Minerals Ltd (ASX:LSR).

This presents as a highly strategic initiative by Vango from a number of perspectives.

Taking the equity stake strengthens its relationship with Lodestar in the Marymia gold district in the Mid‐West region of Western Australia which hosts Vango’s high‐grade Marymia Gold Project.

Vango will settle its strategic investment in Lodestar via Vango the issue of approximately 3.5 million ordinary fully paid shares at a deemed price of 17 cents to Lodestar with agreed escrow provisions.

Taking a stake in Lodestar also serves to reaffirm and consolidate its position as the dominant explorer-developer in the region.

It is worth noting that Vango has already established a farm in and joint venture agreement with Lodestar, providing it with an option to earn up to a 51% interest in the group’s Ned’s Creek Project which is in close proximity to the Marymia Project.

The first phase of drilling under the Farm‐in and JV Agreement has now commenced, with a 1,500 metre reverse circulation (RC) drilling program at the Contessa Prospect within the Ned’s Creek project area.

Included in both of those intercepts were smaller intersections of bonanza grade gold grading between 100 g/t gold and 134 g/t gold. 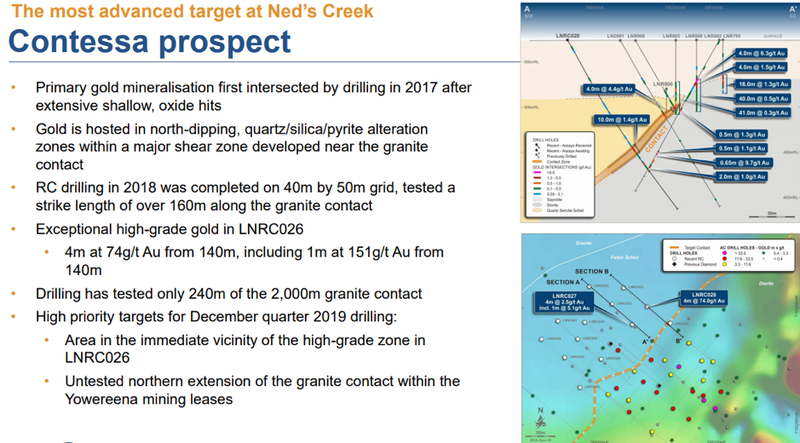 Drilling will also seek to test nearby supergene gold mineralisation intersected in previous aircore drilling at Contessa to scope the potential for a starter open‐pit operation.