In fact Vango has been very active at its Marymia Gold Project over the last six‐month reporting period, making significant progress towards realising its two key near term objectives:

i) To continue to grow the Company’s high‐grade gold resource base at Marymia; and

Drilling activities continued to focus on testing priority targets for both open‐pit and high‐grade underground resources within the high‐priority Trident‐Mareast‐Marwest corridor and the Triple P‐Albatross/Flamingo‐Exocet corridor as seen below: 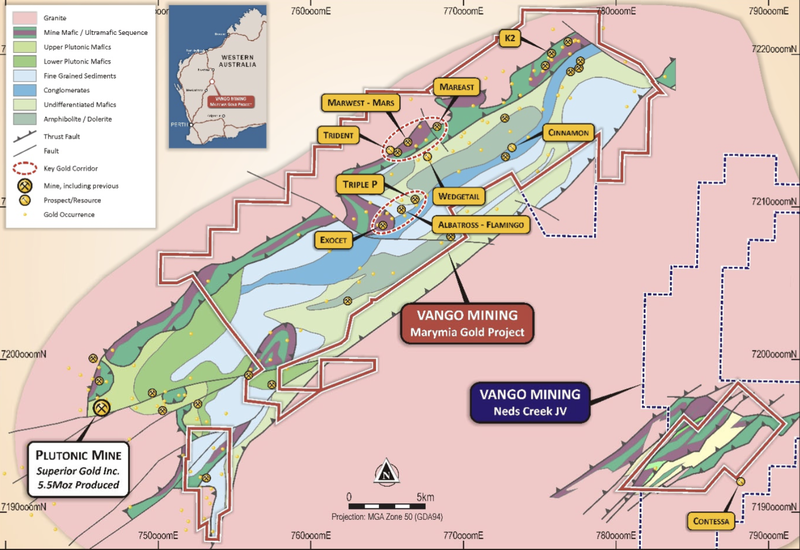 The most recent results released, refer to the PHB-1 area located north-east of the previously mined K2 open-pit (see below) where drilling had focused on a narrow mineralised corridor, though little testing has been conducted below 100 metres from surface. 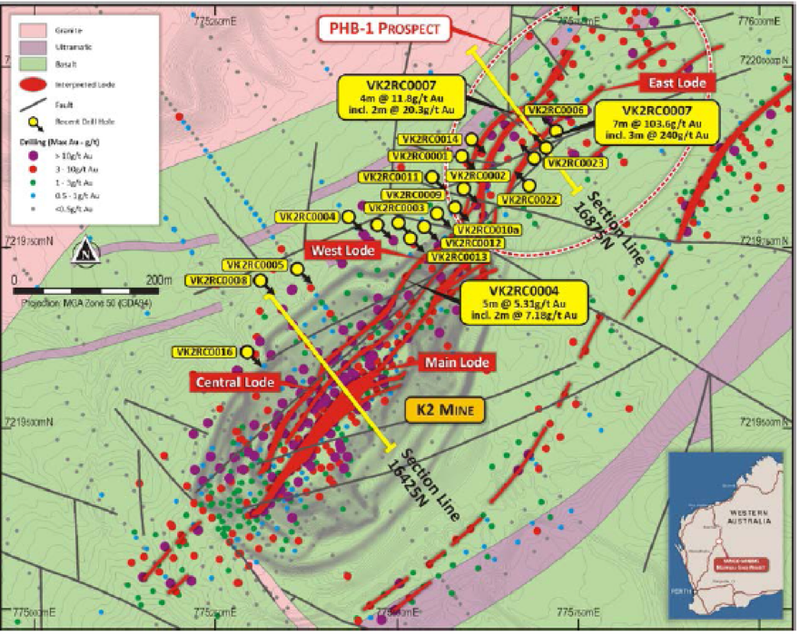 Drillhole VK2RC0007 which can be seen to the north-east targeted extensions of the Main Lode structure based on a new, shallow plunge, interpretation of the gold mineralised zones.

The relatively shallow Eastern Lode intersection may represent a new discovery that is open to the north-east, south-east and at depth.

Further drilling is being planned to define the potential extent of this high-grade lode structure.

In addition, the Main Lode intersection may represent the down plunge extension of the mineralisation that was the main focus of the previously mined K2 open pit.

Follow-up drilling is required to define the resource potential, however it is already evident that PHB-1 may be a significant new open pit resource opportunity with the possibility of high-grade underground extensions.

Significant intersections were also produced from the West Lode structure, most notably 5 metres at 5.3 g/t gold from 176 metres, including 2 metres at 7.2 g/t gold in VK2RCD0004 which can be seen on the map just to the south-east of the ‘Western Lode’.

This intersection is at the base of a reverse circulation (RC) pre-collar hole with diamond core results from the remainder of the drill hole to come.

Encouraging gold results were also received from two broad, recrystallised sulphide (mostly pyrite with pyrrhotite) zones intersected by RC/diamond drillhole VK2RCD0008, associated with the West Lode at depths ranging between 195 metres and 264 metres and the Central Lode at depths between 320 metres and 346 metres downhole.

Further drilling results are expected shortly and management is working on a strategy for new drilling to define new open pit and underground resource targets, particularly in the PHB-1 area.

The latest intersections will be incorporated into new interpretations of key lode structures in this area, prior to incorporation into the planned Marymia Gold Project resource upgrade.

Vango has strengthened its operations with the appointment of Mr Andrew Stocks joined the Board as Managing Director.

Mr Stocks has a strong track record of project development and management in the resources sector, and notably worked on the Plutonic mine immediately south of the Vango’s Marymia project.

Since his appointment, Mr Guo has provided $1 million in funding with a 12 month term to the company, bearing an interest rate of 8% per annum payable upon repayment of the loan.

Finally, a Strategic Partnership Agreement with China Non‐Ferrous Metal outlines the framework under which China Nonferrous Metal Industry’s Foreign Engineering and Construction Co Ltd (NFC) proposes to provide project financing currently estimated at $70 million, which will assist in the financing and development of the company’s 100%‐owned Marymia Gold Project.