Turkish crisis may prove a boon for ASX borate junior

Borates are naturally-occurring minerals containing boron and are integral in the natural world, being a micro nutrient required for all plant and animal life.

Yet they are increasingly important in the technological world as these materials form a strong industrial base, producing a broad range of goods and applications used in everyday life and modern technologies.

Such is their importance that last year borates appeared in a European Commission report identifying a list of raw materials that are crucial to the European economy. Not only are they vital to Europe, these commodities are globally important.

However, borates are facing a supply crisis.

This is bad news for new technology manufacturers, but could be a win for borate producers...and their shareholders.

The second largest producer of borates globally is Rio Tinto (ASX:RIO). RIO claim to control 30% of global borate production, in a market that it estimates is growing at 6% per annum.

If this is correct and if there is little opportunity for additional capacity for the balance of the 20% of production, then by 2028, the Turkish Government could control a staggering 70% of the global market.

With the current Turkish currency and debt crisis, this could be a real problem for borates production and distribution.

The Turkish lira has lost more than 45% of its value this year, with calls from the Turkish president urging people to support the currency by ditching dollars and gold in exchange for lira.

However, the currency remains in freefall, hitting a fresh record low this week after US President Trump announced a doubling of steel and aluminium tariffs on Turkey in a retaliatory move... and there may be more tariffs to come.

This all means that producers outside of Turkey will become increasingly relevant.

As for ASX investors, the opportunity to invest in borates specifically is slim. However, there is one largely undiscovered gem trading on the local bourse — American Pacific Borate and Lithium (ASX:ABR).

This is a junior, speculative stock so investors should seek professional financial advice if considering this stock for their portfolio.

ABR has the largest declared borate Mineral Resource Estimate — outside of Eti Maden and Rio Tinto — of 120.4m tonnes at 11.6% boric acid equivalent, for a total of 13.9m tonnes of contained boric acid.

In December 2017, ABR released a Scoping Study for a 25-year mine producing 246,000 tonnes of boric acid per annum to be built over two phases.

Capital expenditure for the first phase was US$98 million, inclusive of a 20% contingency. This delivered a post-tax, unlevered internal rate of return (IRR) of 41% and a net present value (NPV) of US$747 million (A$1.02 billion).

Since the release of the Scoping Study in December 2017, ABR now also expects to be able to monetise an additional by-product credit. It has also been working on ways to reduce operating expenses, while making its plant more flexible to reduce operational risk.

Considering that the Scoping Study delivered an EBITDA in the first year of full production of US$155 million, along with the fact that the Mineral Resource was increased by over 30% in February 2018, it could prove to be an even more substantial project.

Notably, RIO’s borate operations that delivered EBITDA margins of 38.7% and EBITDA of US$244m in 2017, is located within 100 kilometres of ABR’s Fort Cady project on the California-Nevada border.

In May 2018, ABR secured strategic cooperation agreements with two Chinese state-owned enterprises, Sinochem and Sinomach. Both companies rank higher than BHP and Rio Tinto on the list of Global Fortune 500 Companies.

As can be seen in the chart below, Turkey and ARB are forecast to raise their share of global supply through 2028. 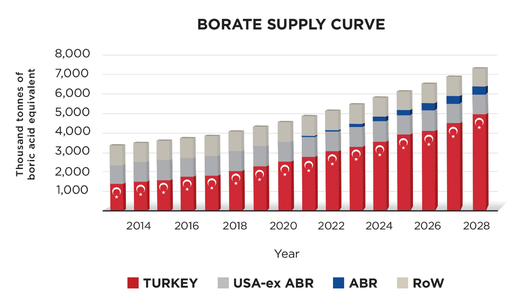 In the past two weeks ABR has raised $4 million and is trading at around 20c a share. There are 190m ordinary shares on issue and around 22m options. At its current price of around 20c per share, ABR is trading at less than 5% of the NPV on its Scoping Study, suggesting there is plenty of upside for shareholders.

Next stop for ABR is a Definitive Feasibility Study (DFS) that it is seeking to complete in the current quarter. The completion of DFS will coincide with the lodgment of the water permit application, which is the final permit required for the company to construct and operate its initial phase of production of 82,000 tonnes of boric acid per annum. 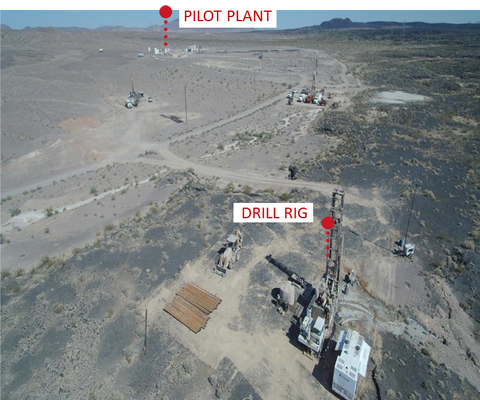 The company has signaled that this application may take up to 18 months but is planning on being construction ready by the middle of 2019, suggesting it is confident of a short permitting timetable.

It looks as though all is falling into place for ABR and current macro events could potentially be the icing on the cake for the company.