The upshot, from drilling down to 1 metre sample resolutions is generating a material increase in gold grade that indicates the potential for multiple narrow high-grade gold veins within the Illara shear zone.

Creasy 2 is one of the original nine high-priority VMS targets identified in the aero-magnetics study.

From a geological perspective, the prospect is a copper-gold-zinc soil anomaly coincident with a 200 metre long zinc-lead gossan within BIF and mafic schist.

Rock chips from the gossan that returned up to 2,900ppm zinc and 3,700ppm lead (RVR069), are a significant 600 metres to the south along strike from the gossan rock chip RVR041 – which returned anomalous zinc up to 1,560ppm indicating an anomalous strike length of more than 600 metres.

The following provides a snapshot of recent results received from Creasy 1, Harmonic and Creasy 2. 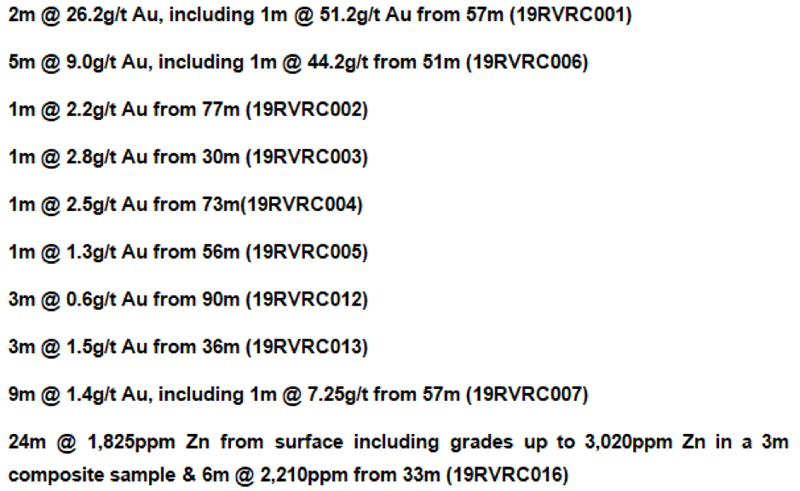 Examining the results in more detail, the Creasy 1 target comprises gold mineralisation along the extensive Illara shear zone which forms part of the 20 kilometre prospective gold strike which is a component of the Maynard Hills greenstone belt.

From a geological perspective, the Illara shear is between a prominent outcropping quartzite ridge in the east and a package of mafics / metasediments / BIF.

This is indicated on the following map. 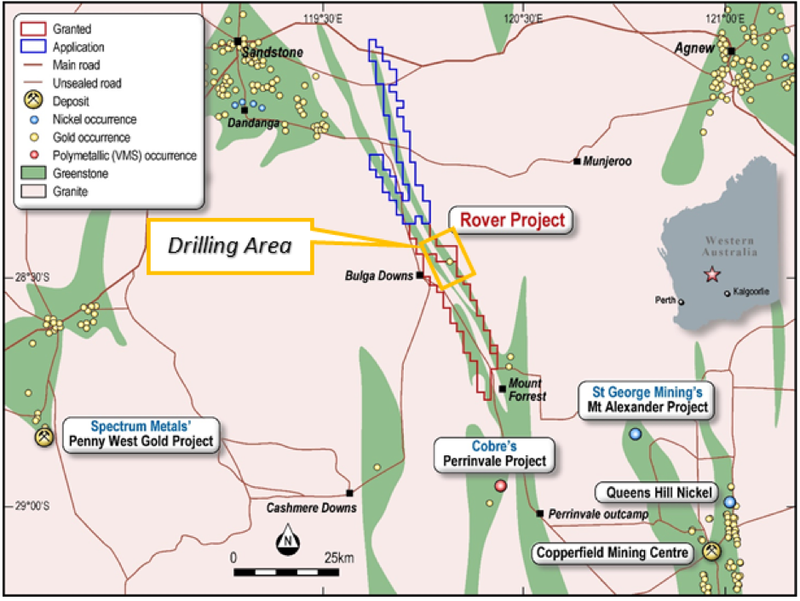 The new 1 metre samples indicate gold mineralisation at Creasy 1 has been intersected over 1.2 kilometres along strike.

Future drill testing at Creasy 1 will aim for better definition around high-grade zones, down dip and along strike.

In October 2019, an expert study of detailed aero-magnetics that was reconciled with historic exploration, identified nine high-priority VMS targets on the Maynard Hills greenstone belt.

In addition, the December RC drilling campaign intersected potential VMS mineralisation at the Harmonic prospect including the aforementioned 15 metres at 1.4 g/t gold.

Harmonic was discovered by drill testing a portable XRF copper soil anomaly, and its mineralisation is open in all directions as indicated below. 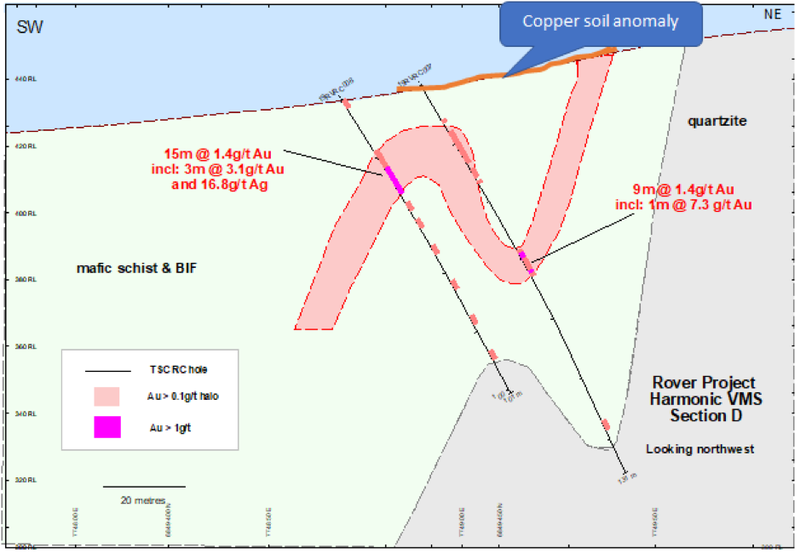 Follow-up RC drilling is planned to test along strike and down dip of known mineralisation.

TSC also plans follow up work at Creasy 2, with potential ground geophysics to identify massive sulphide VMS style mineralisation along the length of the target area.

‘’Concurrently, the geology team are assessing the wider area beyond Creasy 1-3 and Harmonic prospects to develop a longer-term pipeline of areas for priority exploration.’’