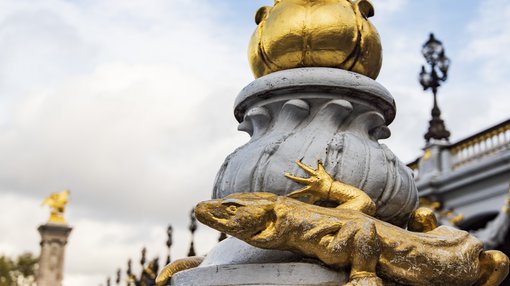 It is important to note that the information relating to Mineral Resource Estimates for the Dynasty Gold Project is a foreign estimate and is not reported in accordance with the JORC Code.

The project comprises five concessions totalling 139 square kilometres and includes three concessions as shown on the following map that received an Environmental Authorisation in early 2016 and is fully permitted for exploration and small-scale mining. 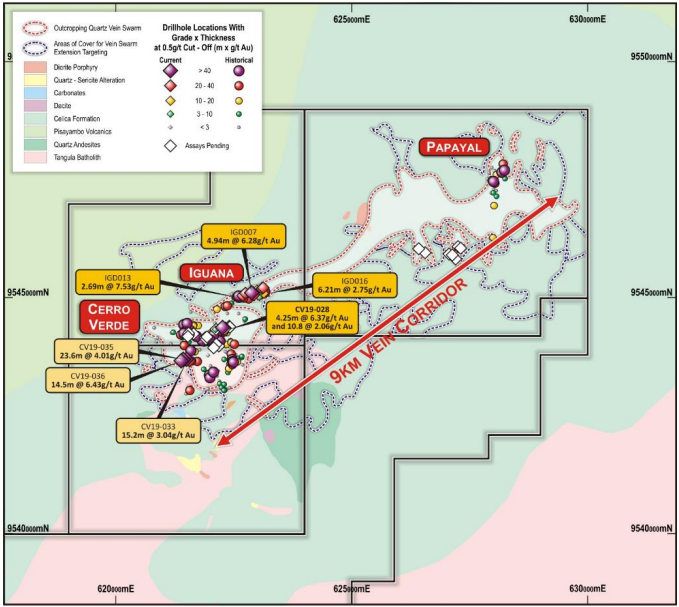 The Iguana Prospect is not a priority target for larger bulk tonnage potential, as is the case outlined in drill results from the Cerro Verde Prospect, where mineralised halos surrounding veins are delivering 3 to 5 times wider mineralised zones.

However, to define key structural controls for the high-grade shoots, and extensions of mineralisation both along strike and at depth within the context of the larger Dynasty Gold Project, the high-grade nature of the veining at the Iguana Prospect merits further investigation.

Reported results are for assayed intervals from the first 20 holes totalling 4,550 metres of the current 12,000 metre diamond drilling campaign. 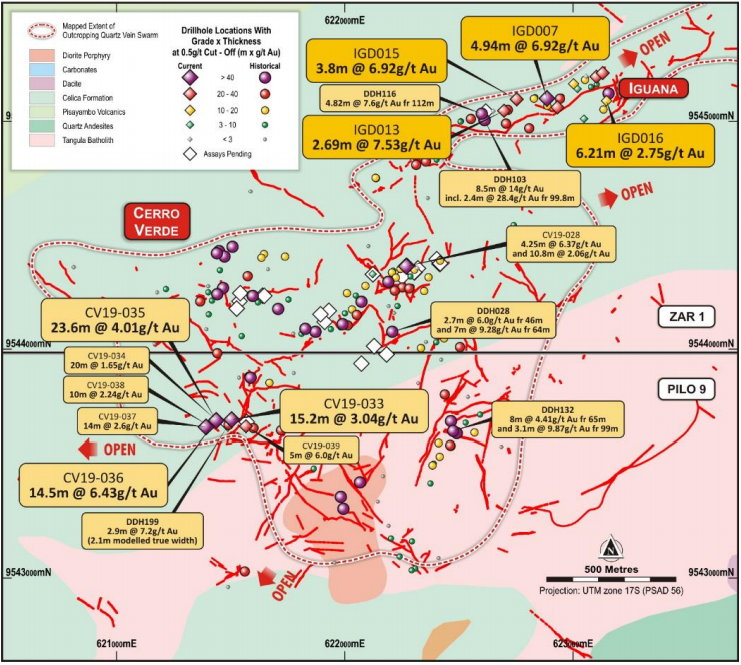 All drillholes intersect veining in the Iguana corridor

Recent drilling focused on a 560-metre segment of the Iguana vein corridor, an initial step toward an 80 metre by 40 metre spaced drill pattern.

Additional detailed structural analysis that will increase confidence in linking recent drilling results to historical results is in progress.

Commenting on the significance of the recent results in the context of the broader Dynasty Project, Titan Minerals managing director, Laurie Marsland said, “Drilling at Dynasty is progressing well and despite some delays, is moving ahead across each of the prospects.

‘’Importantly, we are pleased to see assay results for Iguana confirm the grade, previous interpreted widths and extent of the Iguana vein corridor.

‘’Modelling work in support of the planned JORC compliant update to the resource estimate for Dynasty is well advanced.

‘’The team is looking forward to drilling activity progressing onto our priority target, the Cerro Verde Prospect area.

‘’Re-sampling at Cerro Verde has demonstrated the potential for a significant increase in the volume of material that will define the JORC resource at Dynasty.”