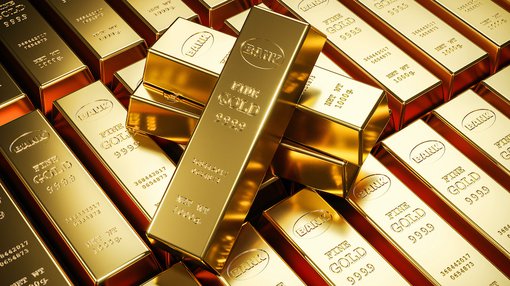 Reported assays included the initial results from an ongoing regional mapping and geochemistry campaign being completed prior to the anticipated maiden drilling next quarter on several priority targets.

The preliminary geological interpretation of the geophysics has been completed which allows for ranking of the multiple gold and gold-copper targets at Copper Duke.

The interpretation will also assist with prioritising the ongoing fieldwork designed to confirm interpretations and refine targeting for drilling planned in the 2021 field season.

Reported surface geochemistry at Copper Duke totals an additional 925 assay results incorporated into the database from the ongoing mapping and, concurrent validating and updating of recent exploration results.

The results continue to highlight significant extensions of known copper anomalism across the Copper Duke Project as the footprint of geochemical coverage expands, and the results identify several new high-grade gold-quartz veins that potentially represent additional exploration targets for evaluation.

This most recent update to the database represents the first time all geochemical and geology datasets for the Copper Duke Project have been systematically integrated into a single database structure.

Our team now has the unprecedented opportunity to fully examine all available data in a digital environment, in conjunction with the newly acquired aerial magnetic and radiometric data.

Within the sampling corridor, several anomalous zones reported are within 1.2 kilometres of the historical United Nations drilling program completed in 1978.

The recent results indicate the potential for a 2 kilometre long north-west striking corridor of gold and copper anomalism of significant widths, extending south-east from the historical drilling where partially assayed diamond holes featured highly promising intersections, including 33.1 metres at 2.5 g/t gold, 154ppm copper, and 2.4ppm Mo, from a drill depth of 9 metres.

This can be seen towards the middle of the following graphic, south of Landaluma and east of El Palton. 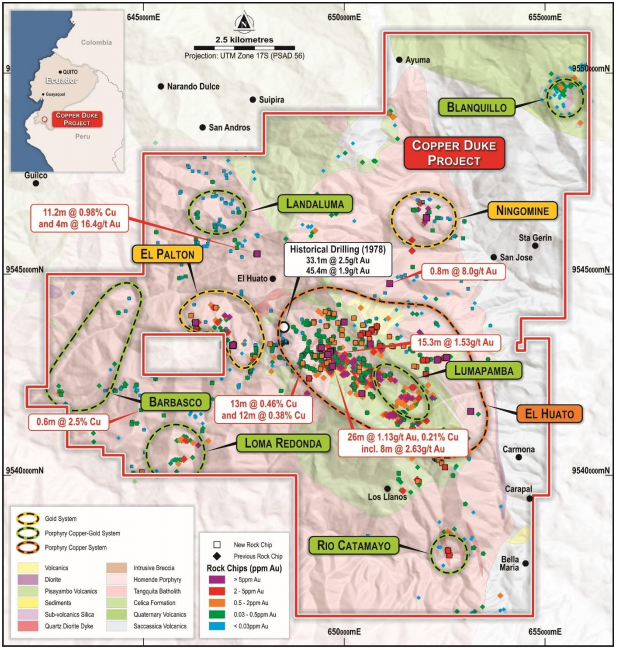 The 2 kilometre long anomalous corridor in the north-west of the El Huato anomaly (see above) includes several zones of favourable anomalism associated with an interpreted intrusion contact mapped from the recent geophysical results.

Reported results are from over 800 linear metres of chip channel sampling from natural drainage exposure and road cuts that trend from south-west to north-east and best transect the anomaly highlighted in the geophysics.

Significant intercept results in this corridor, located 1.2 kilometres south-east of the UN drill location include 27 metres of linear sampling, with a mapped width at surface of 15.3 metres averaging 1.13 g/t gold.

Approximately 820 metres to the south-east of the UN holes along the geophysical feature referenced above, two zones of channel sampling returned 13 metres at 0.46% copper and 12 metres at 0.38% copper.

On a 1.5 kilometre step-out from historical drilling in approximately the same direction, a 26-metre interval on a road-cut delivered gold and copper mineralisation associated with quartz-magnetite stockworks in a hornblende porphyry unit returning 26 metres at 1.13 g/t gold with 0.21% copper.

With previous work focused on naturally occurring outcrops and existing road-cuts, follow-up work planned will include additional trench activity along mineralised trends highlighted in the surface geochemistry where additional sampling will transect the interpreted mineralised trend as supported by the geophysical datasets.

Soil sampling programmes for systematic geochemical coverage are also planned to commence in the coming month.

Additional sampling and detailed mapping will be required to assess the potential of these targets.

The significant extent of mineralised quartz veining in several areas across the project is encouraging for conceptually targeting large scale porphyry systems.

The density of veining in some areas also provides the potential for high-grade gold mineralisation targets within the porphyry field.

Some silver was also identified in quartz veining with one intercept from an area more than one kilometre north-east of the El Huato prospect returning 0.8 metres at 8.2 g/t gold and 16 g/t silver.

Interpretive results for the aerial geophysical survey have been received for the Copper Duke Project.

The ongoing fieldwork will provide additional data for the ranking of targets for maiden drill testing.