Conrad will be the first new mineral resource estimate by Thomson, anticipated to be delivered in the September quarter.

As has traditionally been the case, the silver price has tracked higher in keeping with the gold price, and the end of March it has gained approximately 15% - it is worth noting that while Thompson is essentially a silver play it can greatly benefit from a buoyant gold price as this drives down the costs of production.

These metrics will feed into feasibility studies that come on the back of the new resource estimate.

The mineral resource estimates will focus on the core commodities of silver and gold, but also encompass the fuller suite of critical and new technology metals present in these deposits that have not been considered in previous resource estimates including zinc, lead, copper and tin.

There is also considerable exploration potential to test high-grade shoots that are open at depth in the Conrad mineral resource area, and to explore for concealed shoots to the south-west and parallel lodes adjacent to the Conrad lodes.

Management also plans to drill test a series of satellite prospects in the district for additional silver-critical metal mineral resources.

The following map shows the location of the assets that will be the subject of further exploration and recalibration. 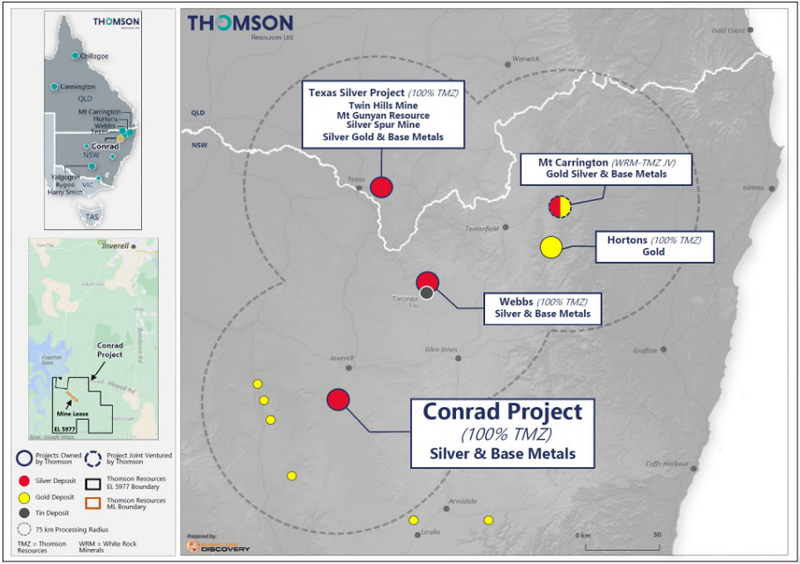 What to expect from Conrad

The Conrad mine is the largest historic silver producer in the New England region of New South Wales, producing approximately 3.5 million ounces of silver at an average grade of 600 g/t with significant co-production of lead, zinc, copper and tin - not surprising then that Thompson has made it a priority in terms of establishing a new mineral resource estimate.

The following shows the Conrad lode system and mineralised trend. 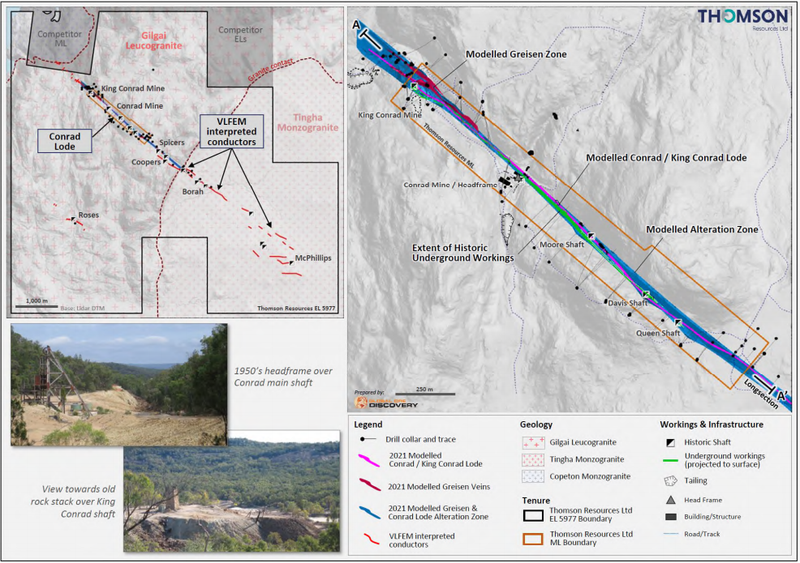 Mineral resource drilling was conducted over a 2.2 kilometre strike length with most holes intersecting the lodes between surface and a depth of 300 metres, although the deepest hole intersected the Conrad lode almost 500 metres below surface.

A number of the lodes remain open at depth as illustrated below. 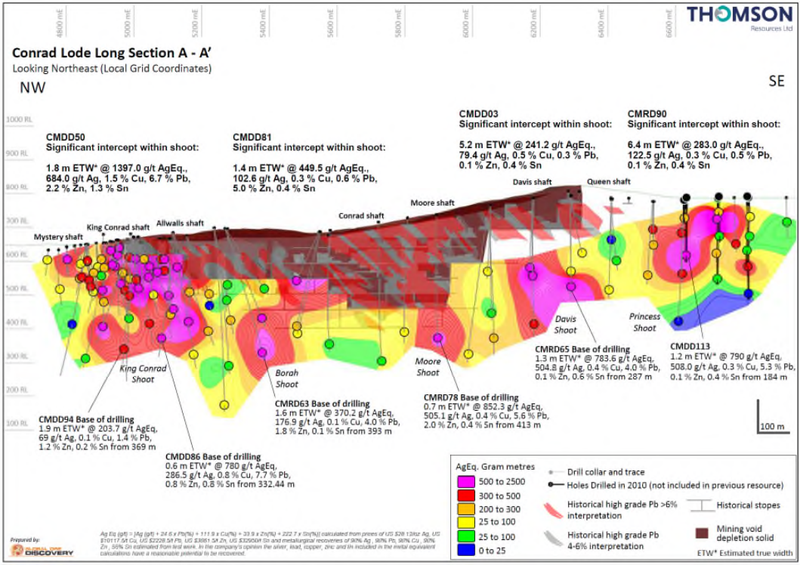 Analysis of the drill hole data reveals a broad metal zonation along strike of the Main Conrad structure, with silver-lead-zinc mineralisation at the north-west end in the King Conrad and Conrad lodes and silver-copper-tin towards the south-east in the Princess lode.

The development of steeply plunging 0.2 to 6.5 metre wide ore shoots is an important feature of the Conrad deposit, with silver equivalent grades x lode width contoured along the Conrad long section indicating that high-grade mineralisation for most metals is hosted within spaced, south-east plunging shoots that are typically 50 to 300 metre strike length.

High-grade ore shoots within the Conrad lode system have currently been identified beneath the Conrad and Davis Shafts and a new shoot not previously mined (Princess shoot), which have returned high-grade intersections in exploration drilling and extend beyond the area of remnant mining voids.

These shoots remain open and untested to depths of more than 300 metres below surface and represent priority mineral resource extension drill targets.

Suffice to say, Thomson has plenty to work with at Conrad, suggesting that there is the potential for an impressive new mineral resource estimate to be delivered in the next few months.

Such a development would be a significant milestone for the company in terms of elevating its broader profile, but the implications could likely extend beyond the Conrad Project to speculation regarding what may be achieved at the other Tablelands projects.

"We have now initiated a systematic process to deliver new mineral resource calculations over the coming months, incorporating a fuller suite of metals and outlining the very attractive exploration prospectively of all our 100% owned Tablelands projects.

"Thomson is very pleased to be able to leverage the quality historic exploration from Malachite Resources NL, making Conrad the first “cab off the rank” where we anticipate a positive outcome from the new mineral resource calculation, encompassing silver as well as a suite of critical metals, such as zinc, copper, tin and lead.

"This work has also highlighted a number of exciting exploration targets and mineral resource extension targets that we will be pursuing.

"In parallel, we are advancing systematic analysis of the existing metallurgical test work of each project.

"This analysis will identify knowledge gaps and include a high-level processing pathway analysis to define, at a conceptual level, the process options for a potential central processing hub that would be at the heart of the Fold Belt Strategy.”